Jalalabad: The Sant Samaj led by Damdami Taksal (Mehta faction) chief Baba Harnam Singh Dhumma today extended its support for Shiromani Akali Dal (Badal) for upcoming state assembly elections. Announcing support for the ruling alliance, Sant Samaj president said that the Punjab government did a lot for religion. He pointed that the government build various memorials, modified the surroundings of the Darbar Sahib complex in Amritsar and also took care of religious places of other religions. 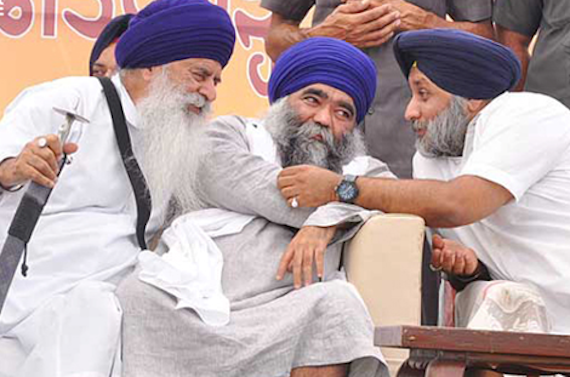 On being asked by media persons about beadbi incidents, Baba Harnam Singh said that the beadbi of Guru Granth Sahib was the ultimate sin and Guru Sahib would themselves punish the culprits. He said that the government had transferred the case related to beadbi incidents to the CBI on request of the Sant Samaj.

When media-persons asked asked him about Behbal Kalan police firing in which who Sikhs were killed by the Punjab police while they were holding a peaceful demonstration against beadbi of Guru Granth Sahib, Damdami Taksal chief said that the incident had taken place when Sumedh Saini was DGP of Punjab. He said that after this incident the Sant Samaj had demanded removal of Sumedh Saini which was accepted by the government.

He accused the Aam Aadmi Party and Congress party for being anti-Sikh. He said that Arvind Kejriwal did not contribute to martyrdom anniversary of Baba Banda Singh Bahadur.