Save Punjab Rally in NY: Protest outside United Nations’ headquarters over India-Pakistan tensions

New York: As per media reports several activists belonging to the Sikhs For Justice (SFJ) held a protest outside the United Nations headquarters in New York to raise their concerns over the escalating tensions between India and Pakistan and its impact on the lives of the people in Punjab.

The ‘Save Punjab Rally’, organised on October 11 in collaboration with civil rights groups and management committees of the Sikh Gurdwaras across North America, also demanded a referendum in Punjab.

During the rally, held across the street from the UN headquarters, the demonstrators carried placards that read ‘Boycott India’s Jingoistic War’ and ‘Support Punjab Referendum.’

SFJ also submitted a communiqué to officials from Uruguay’s Permanent Mission to the United Nations. Uruguay is one of the 15 members of the Security Council and is due to hold the Presidency of the Council in January.

The communiqué said that the escalating tensions between India and Pakistan is forcing thousands of Sikh farmers in Punjab to evacuate their homes, “turning them into refugees.” 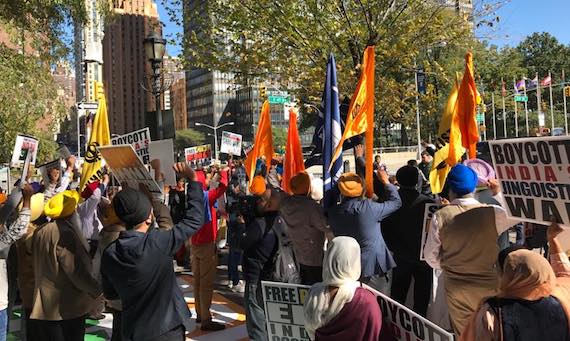 SFJ Legal Advisor said war is not a solution, adding that a referendum should be conducted in Punjab.

Panic gripped the residents of villages in many border districts of Punjab after reports of escalation in tensions between India and Pakistan spread, following a surgical strike by the army on terror launch pads in Pakistan-occupied Kashmir on September 28.

Authorities have also began evacuating people residing in the villages falling within 10 kilometre of international border. Heads of local gurdwaras, temples with the help of Sarpanches have asked the people to evacuate at the earliest in the light of escalating situation.

Punjab shares 553-km border with Pakistan. It has six districts which lie close to international border. There are some 135 villages which lie very close to the IB.