Amritsar: Terming the November 1984 massacre a watershed in Indo-Sikh relations, the Dal Khalsa said this November marks the year when Sikhs will actively pursue the UN and world power, who have remained oblivious to Sikh yearning for justice and under Indian pressure ignored to admonish India for the Delhi carnage.

The call was made at the conclusion of the Rights and Justice March held by the pro-freedom group to mark the 34 years of the 1984 Sikh genocide. Hundreds of activist men and women carrying Mashaal’s, candles, banners and placards marched on the streets starting from Bhandari bridge to Darbar Sahib. They chanted pro-Azadi slogans and lit candles outside Darbar Sahib complex in memory of those who perished in the violence unleashed by frenzied mobs patronage by Congress government led by then PM Rajiv Gandhi. 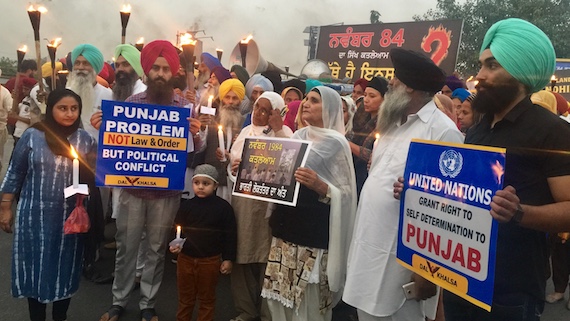 A view of Rights and Justice march organised by the Dal Khalsa in Amritsar on November 3, 2018 | Photo: Dal Khalsa

The organization through a resolution stated that to stop the re-occurrence of Nov 1984 like carnage, Azaadi from India is the only answer. The organizers make it clear that for them the meaning of justice is not compensation but punishing the perpetrators and finding a peaceful resolution of the conflict that give rise to genocidal pogroms, like the one in November 1984.

Party president H S Cheema while speaking to the spirited gathering said today our concern is no longer whether India will do justice because it will not. Today we want to shift the battleground from New Delhi to Geneva. We will make last ditch efforts pursuing the UN to order an international inquiry into the November 1984 genocidal killings.”

The UN, under the new Secretary General, Mr. António Guterres who visited Darbar Sahib recently has to wake up to reality that India -the land of Gandhi is a hate-filled, intolerant society with a political climate detrimental to a large cross section of society, especially regional identities, minorities and nationalities, said the head of hardliner group.

He said the culture of impunity to political and police leadership is in place since 80’s. Even today after three years of incident, the guilty cops of Behbal Kalan unprovoked firing are free from so-called long arm of the law. Referring to beadbi of Guru Granth Sahib at Bargari, he said the heretical cults and gurudom are given free hand with full impunity by establishment to mock and insult the basic fundamentals of established religions especially of minorities.

Another party leader Kanwar Pal Singh said while we were surprised at the lack of UN response, we are not giving up hope and would follow a consistent approach forcing them to take action and not act in a discriminatory manner. If the UN can order an enquiry in Sri Lanka and Myanmar, surely it can do in India.

From Canada to the US, provincial governments have acknowledged through resolutions the November 1984 pogrom as genocide. We believe, it is the turn of the UN not only to endorse this but to even go beyond this.

Interestingly, the thrust of speakers of today’s protest was engaging the UN. One of the placards took a jibe at UN prompting the world body to break its silence. The people on the streets of Amritsar gathered to commemorate 34th year of pogrom wants to remind the United Nations of its duty to uphold the UN charter of human rights, said a GNDU student, who was part of the protesters.

President of Sikh Youth of Punjab Paramjit Singh Mand said the present incumbents to power in the country are clearly determined to create a Hindu state and they are entitled to their wishes and dreams. Similarly, we too are entitled to our regional, religious and nationalist aspirations by virtue of our birth, history and legacy and as per the UN charter.