Chandigarh (August 10, 2016): US based human rights group “Sikhs For Justice” (SFJ) while reiterating its commitment to continue campaign for “Punjab Independence” through democratic and peaceful means refuted Indian Police’s allegations of terrorisms against Sikh activists campaigning for “Referendum 2020”.

Committing to provide legal defense to its US and Punjab based campaigners, SFJ claimed that Jaspreet Singh, Hardip Singh and Kuldip Singh are being falsely charged with terrorism by Police but in fact they are political activists who just distributed pamphlets and T-Shirts in support for referendum.

SFJ with over hundred thousand followers on Facebook and Twitter is an international advocacy group propagating for Sikhs right to self-determination as guaranteed by UN Charter and International covenants and is seeking referendum in the State of Punjab. 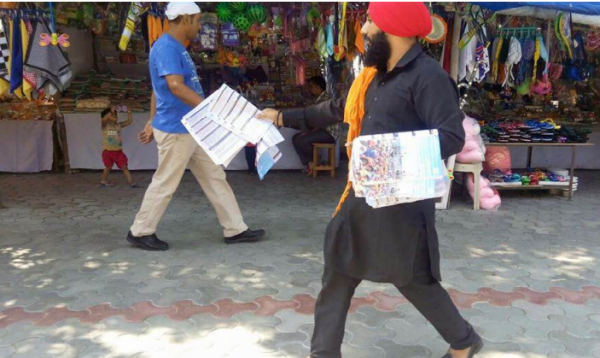 Harjap Singh Japhi, a US based Sikh activists, who is being charged by Punjab Police for reviving Khalistan movement, is in fact only running the referendum campaign on social media, claimed SFJ.

SFJs website and Facebook page has already been blocked by Indian Government for running referendum campaign, stated Gurpatwant Singh Pannun, legal advisor to SFJ. “And now filing of fabricated terror charges against SFJ’s campaigners is another attempt to silence the demand for Punjab’s independence”, added Pannun.

Terming IGP Angra’s theory of terrorism as concocted, preposterous and entertaining, attorney Pannun stated “Punjab Police’s terror charges against Japhi are based only on making phone calls to Village Handowal’s Jassa and “providing money, religious literature and T-Shirts”, but the Said actions of Japhi are not crimes in any book of law.

Recently many Sikh activists in Punjab who are participating in SFJ’s campaign by distributing referendum pamphlets and T-Shirts are being targeted by Indian Police. On June 6, during “Operation Blue star” anniversary many Sikh youths who were wearing and distributing Referendum 2020 T-Shirts were detained by the Police.