Amritsar:  Giving a reson to celebrate to the agitating pathis who are rendering their services in Darbar Sahib complex, the Shiromani Gurdwara Prabandhak Committee (SGPC) here on Tuesday conceded to their demands which also included hike in the basic wages. 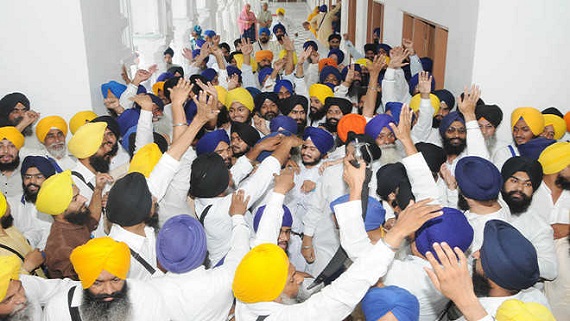 Pathis stage a protest in support of their demands at Akal Takht Sahib in the Darbar Sahib complex, Amritsar, (FIle Photo)

SGPC chief Prof Kirpal Singh Badungar reportedly said that pathis had been part and parcel of the Sikh community and commanded high respect.  “A sub-committee was constituted to deliberate over their demands. After taking into consideration its report, it was decided to accept their demands,” he adds.

The SGPC raised their shift wage from Rs 600 per path session to Rs 800. For medical aid, they will be entitled to avail benefits under group medical insurance scheme, but the premium will be deducted from their wages, media reports said.

It is estimated that the around 8000 pathis are engaged by the SGPC in its gurdwaras across the state on a temporary basis. There are 800 pathis at the Darbar Sahib Complex, 500 at Gurdwara Shahidan Sahib and nearly 150 each at Gurdwara Budha Sahib and Gurdwara Baba Bakala.

Furthermore, the SGPC chief added that though the matter was to be discussed in the executive body meeting on August 8, but it was deferred and the issue was resolved on priority.

Earlier on July 31, pathis protested at the Darbar Sahib when Badal Dal chief Sukhbir Singh Badal and his wife and Union Minister Harsimrat Badal were there to attend an akand path at Akal Takht Sahib, reports The Tribune (TT).