New Delhi: The Supreme Court of India (SCI) here on Monday reportedly stayed all criminal proceedings in connection with an FIR registered by the Jammu and Kashmir Police naming Major Aditya Kumar as an accused with regard to Shopian firing incident in which the Indian army opened fire on unarmed protesters in which three civilians were killed.

A three-judge Bench headed by the Chief Justice of India which had on February 9 agreed to hear the matter — also directed that no coercive measures shall be taken against Major Aditya Kumar. It is widely speculated that with passage of this decree the Indian judiciary has implicitly approved the state sponsored excesses on the people of Jammu and Kashmir.

The aforesaid order  came on a petition filed by Major Aditya Kumar’s father seeking quashing of the January 27 FIR against his son. The petitioner was represented by senior advocate Mukul Rohatgi while Attorney General appeared for the Centre, notes The Tribune (TT) in its report. 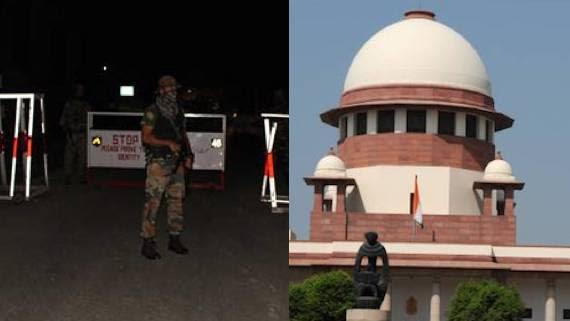 It was on 27th January 2018 that the Indian army, fully equipped with assault rifles and other modern weapons opened fire at protesting villagers in Ganwapora village, district Shopian in which two civilians were killed. The Indian army whilst justifying their action had maintained that the stone-pelting protesters were about to lynch them at that time.

Meanwhile, the Jammu and Kashmir Coalition of Civil Society (JKCCS), a Kashmir based human rights group in, has termed the SCI’s order staying the police investigation against Major Aditya Kumar of 10 Garhwal Rifles as “irregular and against the established norms of criminal procedure” and “appears to favor the accused, at the cost of the victims”.

In a reported statement issued by the JKCCS it said that “First, the stay of investigations against Major Aditya Kumar is irregular and against the established norms of criminal procedure. Courts rarely interfere in ongoing investigations. The FIR is a recording of information of a cognizable offence (for example murder and other serious offences). When in receipt of such information, the police are duty bound to lodge the FIR and begin investigations. “Self defence”, and other such justifications for action, cannot be considered at the stage of registration of FIR and certainly cannot be a basis to quash the FIR (as the petition in the Supreme Court of India seeks). That is a question for investigations, and more importantly, trial.

The army is entitled to its rival version of events (including in the form of a counter-FIR) but the claims of the army cannot be used to prevent the registration of a FIR at this stage and investigations on the version of the victims or other persons that the army firing was an act of murder”.

“Second, today’s order is neither surprising nor a serious set back to the extent that the impunity for the armed forces in Jammu and Kashmir is entrenched. While the police rarely file FIRs against the armed forces, it is even more rare for them to carry out any proper or fair investigations resulting in the filing of a chargesheet.

Further, even when investigations indict the armed forces, either sanction for prosecution under AFSPA is declined or the armed forces successfully transfer the cases to the opaque court-martial process that often result in acquittals,” the statement reportedly said.

“It is this wider culture of impunity that influences the legal processes. A recent petition in the National Human Rights Commission (NHRC) – based on the “human rights” of the soldier – is a perverse example of this culture where an armed soldier is being compared to a protesting civilian,” reads the quote from the statement of JKCCS published in the Indian Express (IE).

“But the NHRC petition, perhaps unwittingly, does point to the true state of affairs in Jammu and Kashmir when it refers to “sub optimal war” and the “Geneva convention”. Past actions of the State – including the judiciary – under Indian domestic law that have ensured impunity for the armed forces, and the reality of Jammu and Kashmir – an armed conflict – clearly indicate that justice is only possible in Jammu and Kashmir under the broader framework of international law, including international humanitarian law”, it further adds to its statement.