Jalandhar/ Chandigarh: Claiming that dissent and opposition to established political parties is leading to growing intolerance, the Punjab based NGO named Sikhs for Human Rights (SFHR) will organize a convention to highlight the dismal human rights conditions, arbitrary detentions and misuse of UAPA, sedition and preventive detention laws against political activists at Chandigarh on Dec 10.

The occasion will be 67th World Human Rights Day (WHRD) and the subject would be growing intolerance in Punjab, Kashmir and elsewhere in India. Punjab human rights organization, Lawyers for Human Rights and Sikh Youth of Punjab has extended their support to the programme.

Addressing the press meet SFHR head Advocate Harpal Singh Cheema said to give the victims’ of state repression a voice, theirs group would be organizing the convention at Makhan Shah Lubhana auditorium to discuss, debate and formulate the strategy to counter these rights violations. He said the candle-light vigil would be held at Sector 17 in memory of all the victims of state repression. 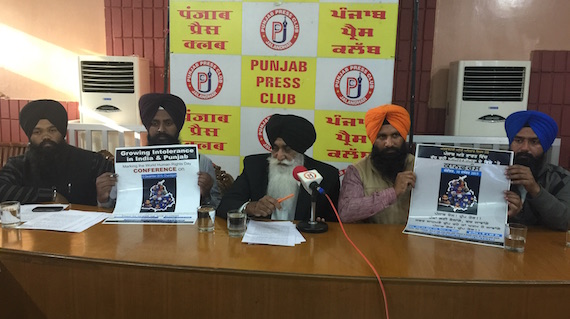 Advocate Harpal Singh Cheema and others addressing the press conference

Explaining the rationale behind the meet, he said the Punjab was witnessing a new round of mass arrests as the state becomes intolerant to opposing religious and political opinion.
A congregation of Sikhs on Nov 10 at Amritsar which saw an assembly of more than a hundred thousand people opposed the misrule and misconduct of Akali Dal led Punjab government tooth and nail. Dubbing the whole affair anti-national and seditious, nearly three to four dozen activists, opposition party leaders, Sikh preachers, demonstrators, social media activists have been either put under house arrests or put behind bars under sedition and preventive detention laws.

He said from Punjab to Kashmir, from Tamil Nadu to the North-East, incidents of rights violations are reaching gigantic proportions. Giving a call to the Indian civil society to take notice and protest against state atrocities, he said it was high time to speak up.

Pointing out that a common feature of violations in all parts of the country is the flagrant misuse of laws, he informed that speakers from Kashmir, Tamil Nadu, and Delhi beside Punjab would deliberate on worsening human rights conditions in respective areas. He said names of key speakers would be declared by Sunday.

SYP head Paramjit Singh Tanda, who accompanied Advocate Cheema pointed out that in the past three decades every attempt to bring justice to victims, hold the security forces accountable for crimes, has been frustrated by powerful persons in the “mistaken belief” of defending the integrity of the state.