Washington, USA: A US based NGO Sikh Information Centre (SIC) has urged the American Sikh Congressional Caucus to speak up for Bapu Surat Singh Khalsa who is hospitalised by Punjab police in wake of his hunger strike. A written statement issued by SIC in this regard reads as follows:

There is no more appropriate way for the American Sikh Congressional Caucus to fulfill the purpose of its very existence than for its members to speak out in honor of Bapu Surat Singh Khalsa, the hunger-striking Sikh who is a California resident and whose cause has motivated tens of thousands of American Sikhs to demonstrate peacefully on the streets of this nation.

Having refused to eat since January 16, 2015, Khalsa is on the verge of death these six and a half months later. Along the way, he has suffered great indignities and inhumanities at the hands of the Indian government to whom he is making his peaceful appeal. The 83-year-old Sikh activist has been arrested thrice, force-fed repeatedly, physically and verbally abused while his son, a U.S. citizen, was arrested from his father’s bedside, jailed without trial, and beaten in custody.

Meanwhile, his supporters have been arrested en masse throughout Punjab, India for doing nothing more than exercising their democratic right to assemble, protest, and demand redress of grievances from their government.

An issue of greater motivation to the passions and interests of the global Sikh population, including especially those Sikhs who have made their home in the United States, can not be named. Bapu Surat Singh Khalsa has chosen to sacrifice his own life in pursuit of justice. As the sincerest exercise in democratic protest, his hunger-strike is unparalleled by any other social or political activism within the Sikh community in the past several decades. 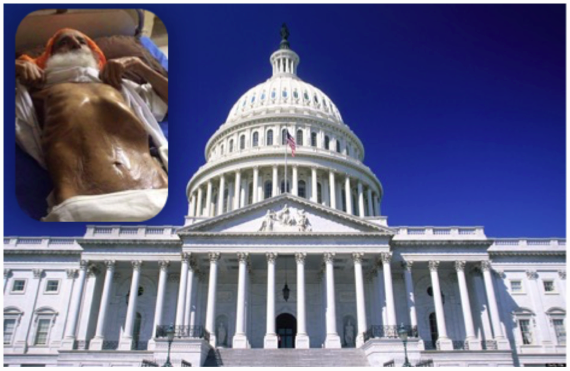 Khalsa’s struggle has caught the imaginations of thousands, including not just Sikhs, but many Californians. Clergy, civil rights advocates, and members of the United States Congress are all inspired by his hunger-strike. All praise Khalsa for his dedication to using peaceful forms of protest.

Speaking in Stockton, just a few miles from Khalsa’s hometown, Christian priest Fr. Joshua Lickter stated in June: “Bapuji Surat Singh Khalsa, a man who hungers for justice in India, is fighting back against an oppressive government, in accordance with his beliefs, by not lashing out in violence against his oppressors. Instead, he’s taking this hunger for justice upon himself. He believes that even his oppressors are his brothers, his neighbors, and his faith prevents him from bringing violence against them.”

Members of U.S. Congress have twice written to Secretary of State John Kerry on behalf of Khalsa. Between the two letters — dated April 15 and May 28 — a total of nine CA representatives (Reps. Jeff Denham, Anna Eshoo, John Garamendi, Mike Honda, Zoe Lofgren, Tom McClintock, Patrick Meehan, Jerry McNerney, and Eric Swalwell) have spoken for the aged Sikh hunger-striker. In May, representatives wrote to Kerry: “We ask that you monitor Mr. Khalsa’s situation and urge the Indian government to immediately release Mr. Khalsa.”

Days later, on June 3, Congresswoman Zoe Lofgren, in remarks to the House of Representatives, stated: “I also ask that this Congress honor the struggle of many political prisoners in India today, including Mr. Surat Singh Khalsa.”

We question why the other 34 members (Rep. Eshoo, to her credit, has spoken for Khalsa despite not being a caucus member) of the Sikh Caucus have not jumped at the chance to speak out on an issue so near and dear to the hearts of tens of thousands of people in the community wbose interests they are supposed to represent.

Other countries are following the example of the U.S. Congress’s courageous nine. In Canada, both the New Democrat Party and the Liberal Party have issued official statements on behalf of Khalsa. In the United Kingdom, 21 members of parliament have joined a House of Commons motion noting not only “the enduring hunger strike of Bapu Surat Singh,” but also related human rights issues and struggles in other areas of India.

So, in conclusion, we ask that the American Sikh Congressional Caucus recognize its duty and its opportunity to honor the life and struggle of a man who has given everything for what he believes is just and right.

Firstly, we urge the Sikh Caucus’s 42 members to each deliver remarks to the House in honor of Bapu Surat Singh Khalsa Ji.

Secondly, we urge the Sikh Caucus to write jointly to Secretary Kerry, ask him to call for Khalsa’s release, and insist upon hearing the Secretary’s reply.

Finally, that his death will not be in vain and so that his memory might be preserved, we urge the Sikh Caucus to introduce a resolution recognizing and honoring Surat Singh Khalsa.

As the patrons of the Sikh Caucus, there is no other issue of greater or more pressing concern to us than the plight of Bapu Surat Singh Khalsa Ji and the cause for which he is struggling.

Patrons of the Sikh Caucus is a nonpartisan group who want their congressional representatives to boldly speak out about Sikh issues of true interest to the Sikh-American community, both domestic and international and specifically including human rights issues in India, and who urge the Sikh Caucus to request these issues be adopted into the agendas of the House Foreign Affairs Committee and the Tom Lantos Human Rights Commission.

The membership of the American Sikh Congressional Caucus consists of (and we encourage you to call them and ask them to “Speak for Surat Singh Khalsa”):