Sources told Sikh Siyasat News that Gurdeep Singh Khera was brought in a train that stopped at the Ludhiana station for a few minutes en route to Amritsar. He arrived at Amritsar around 1:15 am.

Members of various Sikh organisations were present at the railway station to show their support of Gurdeep Singh Khera. The police reportedly prevented Sikh activists from meeting Khera. 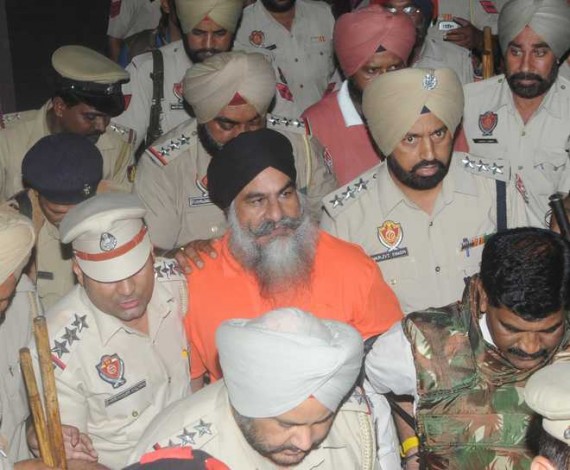 Sikh Political prisoner Gurdeep Singh Khera escorted by police on his arrival at Amritsar. He is now lodged at Amritsar Jail

Gurdeep Singh Khera said he was happy to be back in Punjab after 25 years. His transfer was being awaited since earlier this week.

Media reports say the police and intelligence agencies remained tight-lipped about the transfer. The decision to transfer him to Amritsar Jail at midnight was taken at a meeting of senior police officers.

“The midnight shifting was aimed at avoiding confrontation following Hindu radical groups’ threat to stage a protest on his arrival in Punjab. The Congress and the ruling alliance partner BJP had been opposing the decision to shift Khera to Punjab” notes The Tribune (TT).

Welcoming the arrival of Khera, Mohkam Singh of the United Akali Dal said, “It is good that he is back in Punjab but we are unhappy with the attitude of police and the local administration. We had reached here to welcome Khera and offer him a Siropa but we were not allowed. We criticize this. These people have already spent a lot of time in jails and we want that the Government must think on humanitarian grounds and release him.”