A written release reads: “With the blessings of Guru Granth Sahib Jee and the Guru Khalsa Panth, naujawan panth dardi from around the world have come together to announce the inauguration of the Khalistan Centre”.

The Centre is dedicated to supporting and cultivating Gurmat-driven leadership to further the struggle for Khalistan.

In order to develop the capacity of Panthic naujawan around the world, the Centre will facilitate leadership development by engaging in critical research and dialogue, outlining strategic political initiatives, and offering insightful analysis of past and current affairs. 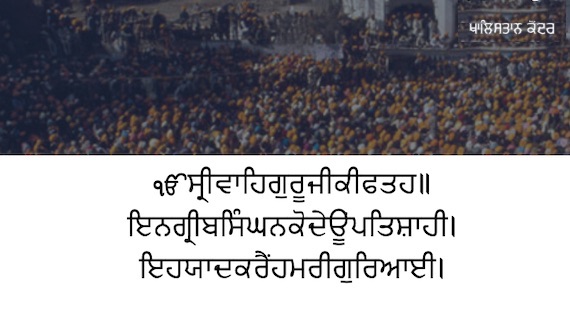 The Centre will build Panthic leadership in line with the Guru’s vision and the Panth’s mandate. Our work will focus on mobilizing Sikhs who are committed to dismantling the sovereign power of the state over our land and bodies, and regenerating the Guru Khalsa Panth to exercise its patshahi from the grassroots.

In order to achieve these aims, the Centre will focus on four key objectives:

Vichaar – cultivating a Gurmat-oriented understanding of the Sikh sangharsh and our vision for raj.

Vidiya – developing future generations of effective Panthic leadership grounded in the values and institution of Miri-Piri.

Virsa – preserving our jujharoo heritage as a reservoir of collective wisdom.

While much of the Centre’s work will be available digitally worldwide, the Centre itself will be headquartered in Surrey, BC in a newly renovated space designed to facilitate education, training, and host public events.

The Centre’s inaugural publication, Who Speaks for Khalistan: Narrating Sikh Liberation, provides an interpretative framework to understand common allegations made against the Sikh sangarsh within an ongoing pattern of Indian interference and the amplification of the Indian state’s targeted messages. We hope to provide a foundation of knowledge for panthic naujawan in order to develop an effective collective response that is farsighted and dedicated to the advancement of the sangarsh itself. This can be downloaded here.

The work of the Centre will be powered collectively by naujawan involved with many transnational panthic organizations, including the Sikh Liberation Front, National Sikh Youth Federation, Khalistan Activist Federation, and with the support of Gurdwara Sahib Dasmesh Darbar (Surrey, BC) and the Ontario Gurdwaras Committee.