Sikhs in Ottawa, Canada’s Capital celibrate Visākhī with Canadian PM in the parliament

Ontario (April 11): The Sikhs created history again by celebrating Visakhi in the Canadian Parliament with the Prime Minister, Honourable Justin Trudeau and his cabinet colleagues that included 17 MLA’s, including 4 ministers in his cabinet.

The prime minister thanked and congratulated the Sikhs for their courage and contribution to the nation during the celebrations. He also acknowledge the injustice meted out to Sikhs in the Komagata Maru incident in 1914 and offered an official apology next month. It is notable here that The British Columbia Regiment (Duke of Connaught’s Own) that participated in the Komagata Maru incident was recently headed by the decorated Sikh Soldier Harjit Singh Sajjan who is today, the defence minister of Canada.
Such is the distance that ‘humanity has covered grounds of equality’ in this nation.

Prime ministers cabinet is true reflection of the equality he practices with representatives from all backgrounds in his government and inner cabinet. The Sikhs presented him with a sword to mark this occasion and to honour the Honourable Prime Minister. 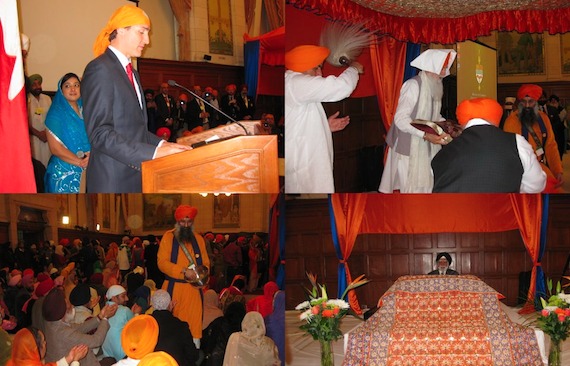 The celebrations started on the 9th of April with commencement of Akhand Path of Sri Guru Granth Saibh Jee, a trend that is continuing since 1994 in the Canadian parliament that was first initiated by the previous Mississauga MLA, Mr. Gurbax Singh Malli, who was also in attendance and was honoured with a plaque for his selfless service to the nation. The Bhog ceremony was held today in the reading room of the parliament which was packed and the Sangat was flowing over to the other adjoining room(s), rough estimates of attendees was over 1000, Sikhs from all over north America were in attendance to sing the praise of the almighty god and receive the lords blessings.

Akhand Path Bhog was followed by Kirtan, Anand Saibh, Ardass, and Kada Prashad for the entire Sangat. Guru ka Langar was also arranged in the adjoining hall in the parliament itself. The chandoa saibh was gifted to Ottawa by Amritsar specially for this occasion.

The Ottawa Sangat under the leadership of the Ottawa Sikh Society (Ottawa Gurudawara Sahib) left no stone unturned to make this celebrations successful with all the pomp and attire true only to the Guru Saibh Jee. They constructed a 12 feet by 12 feet wooden Palki Saibh with their own hands in just two days.

The atmosphere was of much happiness and celebrations that will continue for the entire month of April. The government of Ontario, the largest province in Canada has already set the month of April as the Sikh Heritage Month in Ontario and today the Sikhs request to the Prime Minister to recognize and declare April as the Sikh Heritage Month in the Whole of Canada.

Later this week (April 15) the Sikh youth of Ottawa are continuing the Sikh heritage month celebrations at the Ottawa city hall where they had hoisted the Nishan Sahib earlier on the 2nd of April. The youth and children will perform Kirtan, art work and martial art (Gatka) to represent the ‘Spirit of Sikhi’ in the national capital region that will continue at the Ottawa Gurudawara Saibh on the 16 & 17 of April.

All this is notable in the context that Sikhi is very much alive (Chardi Kala) in different parts of the world and Sikhs are proud contributors in every aspect of nation building, whether it is Canada, US, UK, Australia or Africa. The Sun never sets, if it goes down in one part of the world, it rises in another part of the world.