Ottawa, Canada: The global Sikh community has expressed outrage of selection of Kalam Nath as Chief Minister of Madhya Pradesh (MP) State of the Indian subcontinent by the Indian National Congress (INC). Kalam Nath faces allegations of instigating genocidal violence against the Sikhs during November 1984.

Notably, after winning recently held state election in Madhya Pradesh the Congress party yesterday announced Kamal Nath to be the chief minister of the state.

In a written statement issued today the World Sikh Organization of Canada (WSO) has expressed outrage over the selection of Kamal Nath as Madhya Pradesh CM. 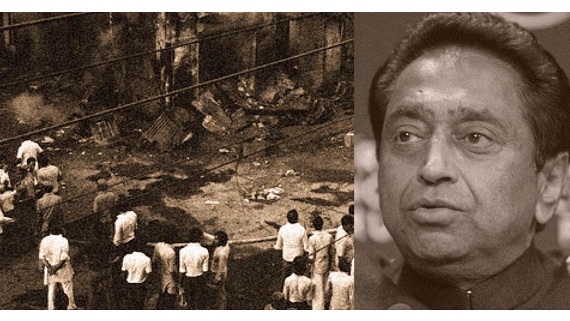 “Kamal Nath is accused of leading a mob that burned several Sikhs alive in Delhi during the 1984 Sikh Genocide. The appointment of Nath follows the victory of the Congress party in the recent Madhya Pradesh election”, WSO statement reads.

“Nath was identified by numerous witnesses, including Indian Express reporter Sanjay Suri, as having controlled a mob of 4000 people that attacked Gurdwara Rakab Ganj, a prominent Sikh shrine in Delhi, on November 1, 1984, following the assassination of Indira Gandhi. Sanjay Suri, testified under oath that he found that Kamal Nath was ‘controlling the crowd’ which he said was ‘looking to him for directions.’ Several Sikhs were burnt alive by the mob” the statement reads further.

On 3 November, The Statesman newspaper reported, ‘Policemen criticized the role of politicians too. Several councillors, they alleged, interceded on behalf of violent mobs when policemen tried to stop arson. Officers wondered what Mr Kamal Nath was doing at Rakab Ganj’, WSO noted.

The Sikh organisation has further pointed that even though Kamal Nath denies his involvement in the killings; however, according to Justice Nanavati, who chaired a commission to investigate the 1984 Sikh Genocide, and the role of government officials, Kamal Nath has failed to satisfactorily explain his role, the length of time he stayed and why he did not contact the police to help quell the violence.

The Government of India’s Nanavati Commission Report also acknowledges “but for the backing and help of influential and resourceful persons, killing of Sikhs so swiftly and in large numbers could not have happened.”

In March 2010, Kamal Nath’s visit to Canada has sparked huge protests by the Sikh diaspora. Sikhs had then called on the Canadian government to deny Nath a visa to enter the country.

WSO President Mukhbir Singh said, “it is absolutely outrageous that Kamal Nath, an individual accused of leading a mob that burnt Sikhs alive during the 1984 Sikh Genocide can be appointed a Chief Minister in India. Large-scale impunity for those involved in orchestrating the 1984 Sikh Genocide has remained an affront to the Sikh community and an insult to human rights in India. Today’s appointment is just another example of this. The selection of Kamal Nath was celebrated by India’s Congress Party as “an era of change” but for Sikhs, it is simply more of the same appalling disregard for Sikh human rights in India as we have seen for the past 35 years.”

The World Sikh News (WSN) editor Jagmohan Singh said: “[l]ike his fa­ther Ra­jiv Gandhi, the pre­sent Con­gress chief Rahul Gandhi has again teased the Sikhs by cat­a­pult­ing Ka­mal Nath to the high pedestal of chief min­is­ter of an In­dian state, clearly sig­nalling that he gives a damn about the feel­ings of Sikhs”.

With this move, it is quite ev­i­dent that the In­dian Na­tional Con­gress of the Gandhi dy­nasty is in no mood to bury the hatchet with the Sikhs.  Sprin­kling salts on wounds comes eas­ily to the Con­gress, he added.