Santa Clara, CA: Over 200 people gathered in Northern California on December 15 to protest a controversial new citizenship law in Indian subcontinent which is sending shockwaves across that region.

“These fascist forces […] need to be stopped,” Ahsan Khan, president of Indian American Muslim Council, told protestors in Santa Clara, CA. “You have seen how people in India are coming on the streets. It is our duty here to come out in large numbers.” 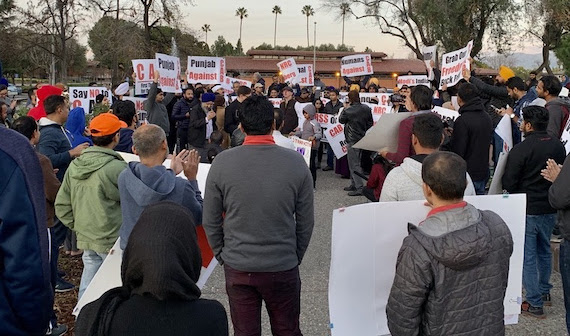 On Dec. 9, the US Commission on International Religious Freedom warned that the Citizenship Amendment Bill “enshrines a pathway to citizenship for immigrants that specifically excludes Muslims, setting a legal criterion for citizenship based on religion.” After the ruling Bharatiya Janata Party (BJP) passed CAB on Dec. 11, protests against it are spreading across India. On Dec. 14, hundreds of students in New Delhi were injured after police attempted to disperse largely nonviolent protests. 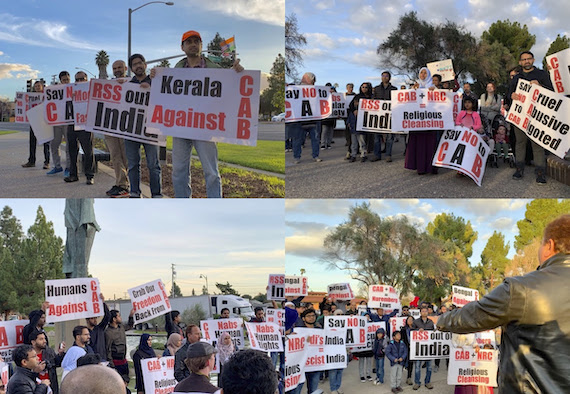 “CAB is a technique used by the BJP to exterminate minorities,” declared Father Steve Macias at the Santa Clara protest. An Anglican priest, he said, “We represent 30 million-strong in India. The BJP wants one thing — the extermination of Christians.” Referencing the Rashtriya Swayamsevak Sangh (RSS), a paramilitary considered the BJP’s base, he warned, “The RSS and the BJP is behind the killing of men, women, and children in our communities.” He demanded the US government “force sanctions against Modi and India to stop this happening.” 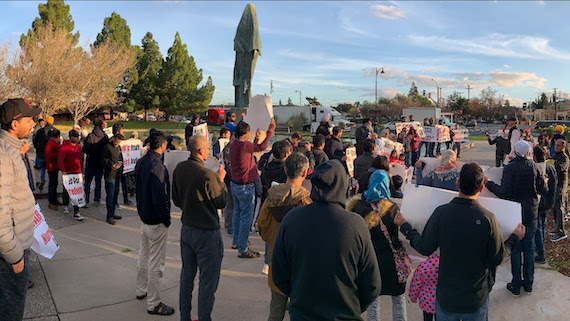 Cheering protestors welcomed Macias’s speech with chants of “RSS out of India.” Other slogans raised included “we are united,” “we stand for freedom,” “stand with Kashmir,” and “hey hey, ho ho, CAB has got to go.” 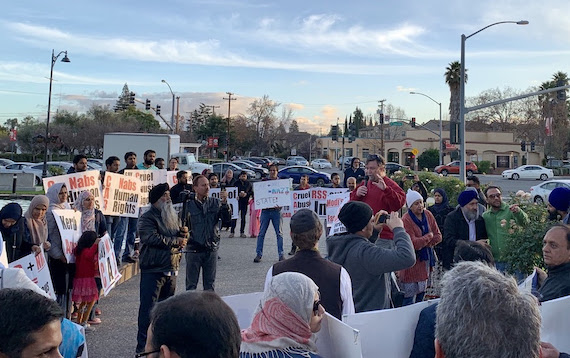 Speaking on behalf of Stand with Kashmir, a global citizen action group, Ahmad said, “We come together against fascism in the world.” He explained, “What’s happening in India today to minorities — Muslims, Hindu Dalits, Sikhs, Christians — and against activists, leftists, the media, it’s something that has been happening in Kashmir for 72 long years. Kashmiris have been the test tube of Indian fascism.”

“CAB is only the latest in a line of recent fascist actions in Prime Minister Narendra Modi’s ‘New India’,” said Pieter Friedrich, an analyst of South Asian affairs. “The BJP’s next goal is to implement a National Register of Citizens across the whole country. This puts all residents of India in the position of having to prove their citizenship. CAB and NRC combined provide a legal route for the BJP to begin cleansing the land of Muslims — and, ultimately, of all non-Hindus. That’s the goal of the BJP — and the Nazi-inspired RSS paramilitary that controls it.” 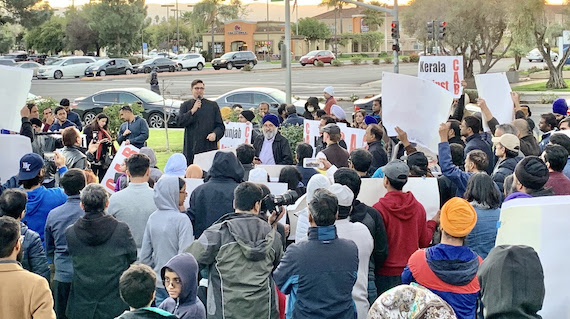 Navjot Kaur, who works with persecuted refugees, said, “The world is progressing and India is going backwards. Whatever our forefathers achieved by getting rid of the colonizers, they are bringing everything back.” She compared her experience growing up in Punjab to the current situation in Kashmir. “Everything was banned,” she said. “Reporters, journalism, everything was banned. We as children were trained to just restrict ourselves in the house. Being a seven-year-old, the first political term I learned was ‘curfew’.”

Brian Wright, a director of Organization for Minorities of India, said stories of religious persecution in India “just grip my heart.” He added, “Being just brothers and sisters in faith, but even more just all of us in humanity, this is something that just needs to stop.”

“Modi is leading India as a Hitler,” declared Gurmit Singh Khalsa, a leader in the San Francisco Bay Area Sikh community. “Muslims have the right to live on that soil. Sikhs have the right. Christians. All people have the right to live on that soil and enjoy the God-gifted liberty we have as humans.” He told protestors, “Your souls, in this dark time, have the ability and the courage to sacrifice your time and come forward to say what is wrong, what is right. Faith and perseverance moves a mountain.”

The rally was organized by the Bay Area Coalition of Concerned Citizens. Participating groups included Indian American Muslim Council, Organization for Minorities of India, and Stand With Kashmir.