Terming January 26 As A Black Republic Day, Dal Khalsa to Hold ‘Right to Self-determination March’ in Punjab Cities on 26 January

Amritsar: To step-up its campaign for the Right to self-determination for the people of Punjab, the Dal Khalsa will organize‘Right to Self-determination March’ at Hoshiarpur, Ludhiana and Zira on 26 January as India will celebrate its seventieth Republic Day.

The ‘March’ will prepare the Sikhs and other people of Punjab to the nuances of this peaceful method to get the right of self determination under the UN treaties and conventions and to reiterate how since Nehru’s speech of 3 June 1947, India has sustained its negative posture to this.

Notwithstanding India’s political stand, India is duty bound to honour its international commitment on this under UN conventions and covenants.

While 26 January is celebrated as Republic day in India, our march on the streets of Punjab would be a follow up of this right and a launch pad for engaging Indian rulers regarding their duties, commitment and obligations under the Indian constitution and international law. The March will also highlight what the organization calls, “constitutional wrongs, injustices and denials.” 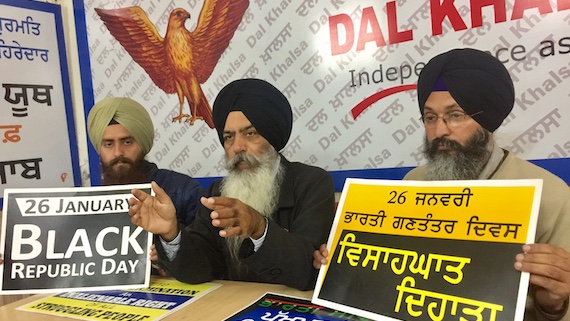 Volunteers of Dal Khalsa will march on the streets of these three cities by carrying Sikh Flags and placards in their hands to convey their message, said party leaders Kanwarpal Singh and Ranvir Singh, while addressing a press meet at party head quarter here today

They said, ‘The Indian Constitution has robbed the Sikhs of their distinct identity and granted impunity to security forces to unleash terror on dissenting people. They rue that guilty cops of Behbal Kalan firing has gone scot free.’

As the Punjab government will hold state-level Republic Day functions in Hoshiapur and other cities and towns of Punjab, the Dal Khalsa will hold three meets in three different cities to build a crescendo in favour of the right to self-determination.

Terming January 26 as a black day for the Sikh nation, they said “Sikhs of Punjab are peacefully and democratically struggling to get this right but it’s ironic that they are facing hawkish Indian state, which has not only denied them this right but portrayed their demand as separatist and classified it as illegal and parochial.

“We believe the only way forward to resolve the Indo-Sikh social, religious, cultural and political disputes is to set in motion the process for the right to self-determination with the UN standing as guarantor,” said Kanwarpal Singh.

SYP head Prof Paramjit Singh Mand said “self-determination is the inalienable right of all nationalities and peoples, including the people of Punjab.”