Thousands Will Join Sikh Celebration in Kent, WA On May 4th

Kent, WA: Thousands of people across Washington will come together for the 27th annual Khalsa Day Celebration and Parade on Saturday, May 4th. The day-long event will feature langar (free community kitchen), interfaith service projects, Sikh martial arts demonstrations, the singing of sacred hymns and a parade. People will gather at the accesso ShoWare Center starting at 10 a.m. PDT, and the parade will start at 3 p.m. PDT.

“This spring, Sikhs worldwide are commemorating Vaisakhi, one of the most historically significant days of the year,” said Kent City Council member, Satwinder Kaur. “It’s remarkable for Washingtonians of all ages to come together and recognize a community that has made significant contributions to the state for over a century.” 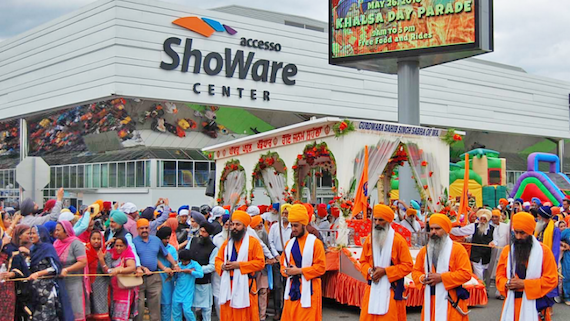 A file photo of Khalsa Day Celebrations at Kent in 2018

In Washington, the efforts to raise Sikh awareness remain critical after recent incidents targeting the state’s Sikh community. In 2017, a gunman shot and injured a Sikh man in his own driveway while telling him, “go back to your own country.” Just last year, the FBI’s annual hate crime report indicated hate crimes rising nationally in 2017 for the third consecutive year – with a 243% increase in anti-Sikh hate crimes since the 2016 report.

“For over 100 years, Sikh American contributions to Washington state have only made our community stronger,” said U.S. Congressman Adam Smith. “The annual Khalsa Day Celebration and Parade continues to be a great opportunity to recognize Washington’s Sikh community, and I look forward to celebrating with my Sikh friends, neighbors and colleagues on Saturday.”