Lucknow: After the Uttar Pradesh (UP) secretariat that houses offices of state Chief Minister and other top bureaucrats of the state was colored saffron in October last year. Its now the UP State Hajj office that have bore the brunt of this drive of saffronisation by the ‘pro-hindutva’ govt of the state. 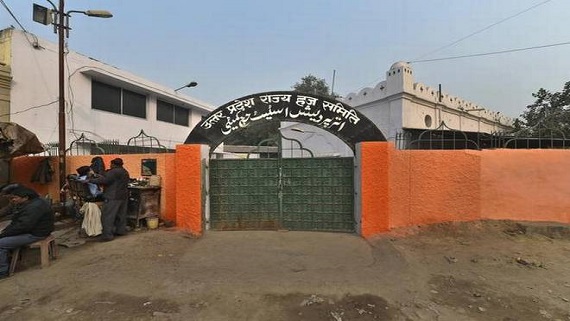 The Haj office compound wall got a bright saffron shade within days of the BJP government reducing the number of holidays allotted to state-recognised madrasas in the 2018 calendar. Painting of the wall is reported to have been carried out on Thursday night by the UP estates department and the Haj office employees were not immediately available for a reaction, Friday being a holiday, media reports said.

Reacting on this decision spokesman of the opposition Samajwadi Party (SP) Sunil Singh Sajan reportedly said “If the BJP really considers the saffron colour as sacrosanct, it should not indulge in politicisation of the colour and indulge in blatant saffronisation.”

While interacting with the media persons All India Shia Personal Law Board spokesman Yasoob Abbas took strong exception to the change in colour and said “What is this? The BJP will paint it saffron, the SP will choose green and the BSP blue…This is politics of colour and should be avoided.”

Meanwhile, Minister of State for Minority Affairs Mohsin Raza told the media “I fail to understand the problem of those having issues with the new colour. Is saffron an anti-national colour? Saffron is a colour which symbolises ujala (brightness) and urja (energy),” he claims.