Dubai: As per the media reports Gurudwara Gurunanak Darbar the only gurudwara in United Arab Emirates (UAE) here on Wednesday in a goodwill gesture organised an Iftar where people of different religions and over 30 nationalities broke the Muslim fast together. 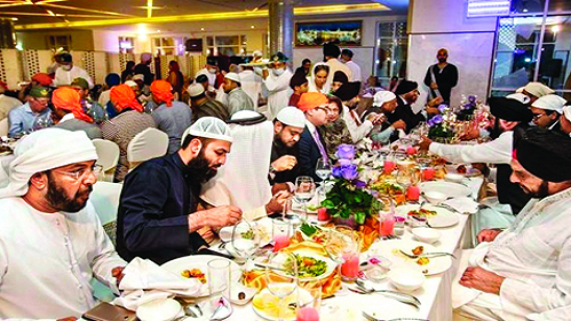 With this a message of Sikhism which stresses on celebrating cultural diversity was resonated from Gurunanak Darbar Gurudwara. It was reported that the occasion hosted around 120 residents of over 30 nationalities to celebrate the holy month of Ramzan and support the Muslim community in breaking their fast in a multicultural setting.

The Iftar on Wednesday was to bring people together in the face of adversity” reads the statement of Surinder Singh Kandhari chairman of Gurunanak Darbar gurudwara published in the  local vernacular.

“In a world that struggles with extremism, the best way to cut it is through creating friendships among different faiths and nationalities and making the difference ourselves. It is only through communication that we can overcome adversities,” Surinder Singh furthers adds to its statement published in Khaleej Times.

”Noting that guests varied from Arabs, Ethiopians, Mexicans to Americans and Serbians.”