UK: Sikh panelist attempted to protest against lack of media coverage on violence against Sikhs in Punjab during BBC live show

London: A BBC presenter threatened to eject a panellist live on-air after he attempted to protest about the lack of media coverage of violence against Sikhs in the Punjab.

Appearing on Sunday Morning Live, Jagmeet Singh, from the educational charity Basics of Sikhi, stood up in front of the camera and interrupted presenter Sian Williams.

Mr Singh said: “I have to say Sikhs are being killed in Punjab and nobody is reporting it. Please report it.”

Visibly frustrated by the disruption to the show, Williams hit back: “Jagmeet I will have to get you taken out unless you allow polite and respect for guests here and our audience at home.”

After the altercation – which lasted just under a minute – Williams diverted viewers’ attention to an unrelated clip. When cameras returned the panel, Mr Singh was no longer there. 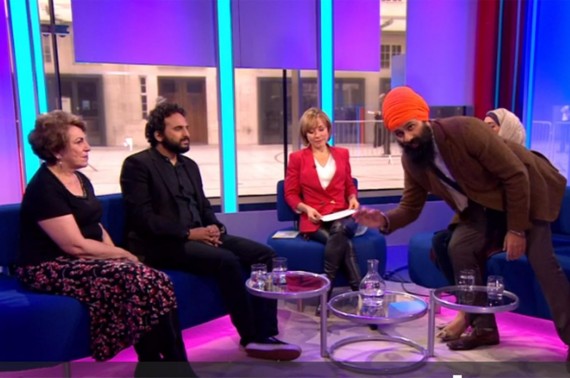 Basics of Sikhi, an educational charity based in the UK which aims to spread the Guru’s wisdom, accused the presenter of belittling Mr Singh.

The charity said on Facebook: “So disappointed by the BBC’s treatment of Jagmeet Singh on Sunday Morning Live this morning. The presenter shut down Singh and repeatedly belittled him from bringing up the issue of violence against Sikhs in Punjab.”

The charity also linked to a petition, boasting 70,000 supporters, urging the BBC to cover violence in the Punjab.

The petition states: “Despite the BBC having large presence in India with many reporters stationed there – it has not picked up this story. There is no mention of this on any of the their news media outlets in India or here in the UK”.

Others praised Singh for bringing the issue up. One Twitter user, Rupinder Kaur, posted: “Fair play to Jagmeet Singh – I am outraged that the BBC and others are not reporting the killing of Sikhs in Punjab.”

A BBC Spokesperson said: “On live TV unplanned things happen and this was dealt with professionally and appropriately by Sian.”

Note: Above content was originally published by The Independent, under title: BBC presenter Sian Williams threatens to have guest Jagmeet Singh thrown out after on-air protest about Sikhs in Punjab disrupts show” by Ashley Cowburn, at source url: http://www.independent.co.uk/news/bbc-presenter-sian-williams-threatens-to-have-guest-jagmeet-singh-thrown-out-after-on-air-sikhs-in-a6698706.html. It is reproduced as above for the information of readers of the Sikh Siyasat News.