US: Activists to Protest in California Against India’s New Citizenship Law

Santa Clara, CA: Indian minorities infuriated by India’s recent passage of a controversial citizenship bill that excludes Muslims will rally against it on December 15 in California’s San Francisco Bay Area.

“The Citizenship Amendment Bill passed this week foretells a fatal blow to a secular society in India,” warns Arvin Valmuci of Organization for Minorities of India. “CAB opens the door for a full-scale persecution of all minorities in India. It will soon be followed by a national law banning religious conversion, which will impact Christians, Muslims, Sikhs, and all others as it outlaws religious freedom. Millions in India are taking to the streets to protest the CAB Act.” 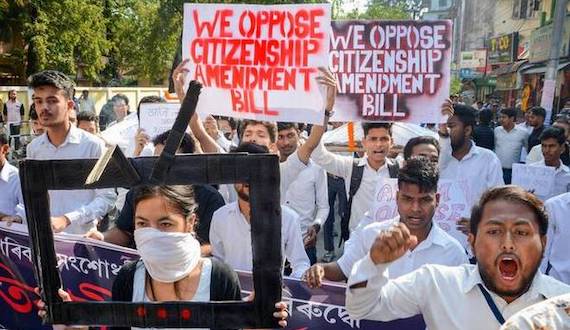 The CAB Act, explained Human Rights Watch, “discriminates on religious grounds in violation of international law.” It provides a swift path to citizenship only for non-Muslim irregular immigrants. On Dec. 9, the US Commission on International Freedom stated, “CAB enshrines a pathway to citizenship for immigrants that specifically excludes Muslims, setting a legal criterion for citizenship based on religion.” The group recommends sanctions on Indian politicians responsible for passing the bill.

The US House Foreign Affairs Committee also spoke out against CAB, stating, “Religious pluralism is central to the foundations of both India and the United States and is one of our core shared values. Any religious test for citizenship undermines this most basic democratic tenet.” On Dec. 13, the UN Human Rights Office denounced the bill as “fundamentally discriminatory,” explaining, “The amended law would appear to undermine the commitment to equality before the law enshrined in India’s constitution and India’s obligations under the International Covenant on Civil and Political Rights and the Convention for the Elimination of Racial Discrimination, to which Indian is a State party, which prohibit discrimination based on racial, ethnic or religious grounds.”

Protests against CAB are currently expanding across most of India. Five states — Chhattisgarh, Kerala, Madhya Pradesh, Punjab, and West Bengal — have announced their refusal to implement the law. In response to protests in India’s northeast, where pushback is most intense, India has shut down internet in four states. “This makes India the internet shutdown capital of the world,” reported CNN on Dec. 14. “The world’s biggest democracy leads in digital authoritarianism — and by some margin.”

“The CAB Act is a key part of the ruling BJP’s Hindu nationalist agenda,” Pieter Friedrich, an analyst of South Asian affairs, told OFMI. “Annexing Kashmir and securing judicial approval to build a temple on the same site where a mob violently demolished a mosque were long-standing BJP demands achieved in the past few months. The BJP’s next goal is a National Register of Citizens that requires every resident of India to prove their citizenship. Combined with CAB, the NRC provides a legal route for the BJP — and the Nazi-inspired RSS paramilitary that controls it — to begin cleansing the land of all non-Hindus.”

In California, anti-CAB protestors will rally at the Civic Center Park in Santa Clara, CA at 4pm on Sunday, December 15.