Wisconsin, USA: On the last day of the month of April, the state of Wisconsin passed a proclamation declaring April as Sikh Awareness & Appreciation Month. On the occasion, Gov. Tony Evers honored the Sikh community of the state by delivering the proclamation to the worshippers of the Sikh [Gurdwara Sahib] of Wisconsin, in Oak Creek.

It is particularly significant for the community that Oak Creek, where a white supremacist had gunned down 6 Sikh worshippers back in 2012, was chosen to proclaim the honor. The ceremony also included some members of family of the people killed in the Oak Creek tragedy. Lt. Brian Murphy, who was the first responding officer who saved lives on that fateful day, was also in attendance. 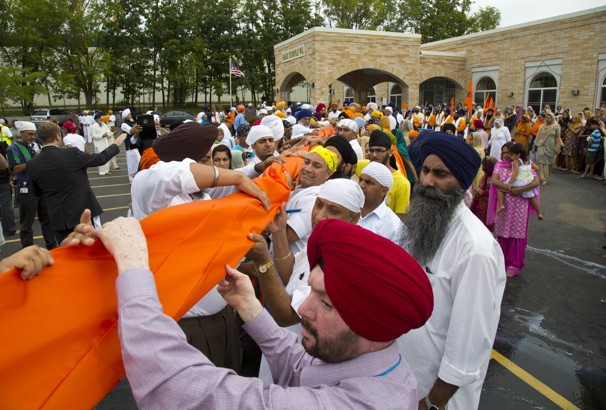 Jaspreet Kaur Kaleka, a local Oak Creek community leader and daughter-in-law of Satwant Singh Kaleka, one of the victims of the 2012 massacre, spoke on the occasion, “The Sikh community is thankful to Wisconsin and Governor Evers for recognizing and celebrating our contributions in this great state,” she said. “To have this ceremony at our gurdwara where such terrible acts of hate violence once occurred reminds us all that recognizing and celebrating our diversity remains our nation’s greatest strength.”

In an effort to raise awareness about the Sikh community and the religious festival of Vaisakhi, the Sikh Coalition led efforts to empower Sikhs nationwide to speak with government officials. As a result of these efforts, in the recent past 13 states in the US passed state-wide resolutions declaring April as the Sikh Awareness and Appreciation Month. They include Colorado, Utah, Connecticut, Wisconsin, California, Delaware, Georgia, Illinois, Indiana, New Jersey, New York, Pennsylvania and Washington.