New York, USA: Criminal charges against 17-year-old Virender Singh were dismissed by the Criminal Court of the City of New York, County of Queens about a week ago.

Virender, an initiated Sikh, was arrested and charged with two counts of Criminal Possession of a Weapon in the Fourth Degree, while wearing a kirpan, or religious sword, which is one of the five Sikh articles of faith. He was arrested in South Ozone Park, Queens while walking to the gurudwara, or Sikh place of worship, to offer evening prayers as part of his daily routine. He tried his best to convince the officers that what he was carrying was an article of faith, and that he is supposed to carry it on his person at all times-even while showering and sleeping-but to no avail. He was arrested and taken to the local precinct for processing. 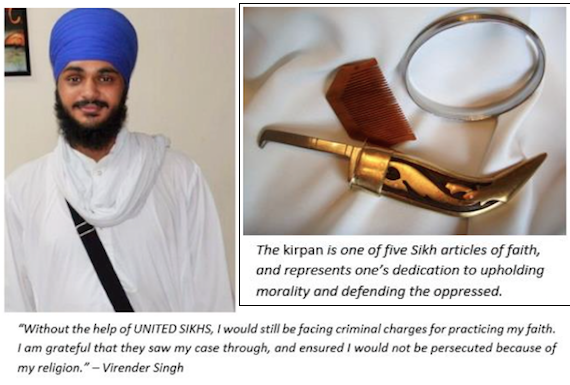 As per information the United Sikhs legal team appointed and worked with attorneys Manmeet Singh, Counsel to United Sikhs representing the Law Offices of Manmeet Singh, P.C., and Enrico DeMarco to fight this case. The attorneys appeared in court on behalf of Virender, and subsequently filed a motion to dismiss this Case in the Furtherance of Justice. At a court hearing about a week ago, the prosecution conceded and the judge accepted the Motion to Dismiss.

Attorney Manmeet Singh remarked, “We are pleased that Virender, who is currently in high school and aspires to be an engineer, can now pursue his dreams without any fear. By now, there is enough legal precedent, at least in New York City, which acknowledges the kirpan as an article of faith mandated to be worn by initiated Sikhs at all times. We sincerely hope the New City Police Department now accepts this precedent and stops making innocent initiated Sikhs undergo these ordeals.”

“As a non-Sikh, it was enlightening to know how dear a kirpan is to an initiated Sikh, and that it’s an inseparable part of his, or her Sikh identity. My law office is pleased to have played a role in the vindication of Mr. Singh’s civil rights.- stated Enrico DeMarco, Esq., of Law Offices of Enrico DeMarco.

Notably, earlier this year, there was a similar victory in the case of Iknoor Singh, who courageously stood up for his right to maintain his articles of faith while undergoing Reserved Officers Training Corps training, in pursuit of his dream to serve in the U.S. Army.