Norwich, Connecticut: Sikh Community of Connecticut along with City and State officials will be unveiling “1984 Sikh Genocide Memorial” which has been placed in Otis Library located at 261 Main St, Norwich CT 06360 on June 1st 2019 at 1:00pm.

35 years ago in June 1984 the Indian Army attacked Darbar Sahib, Amritsar and other Sikh Gurdwaras in Punjab and adjoining state.

Connecticut State and Norwich City officials will also declare June 1st as “Sikh Memorial Day” to Recognise Sikh Martyrs who gave their lives to protect Sikh places of worship and people who were killed during June 1984 Ghallughara and November 1984 Sikh Genocide. 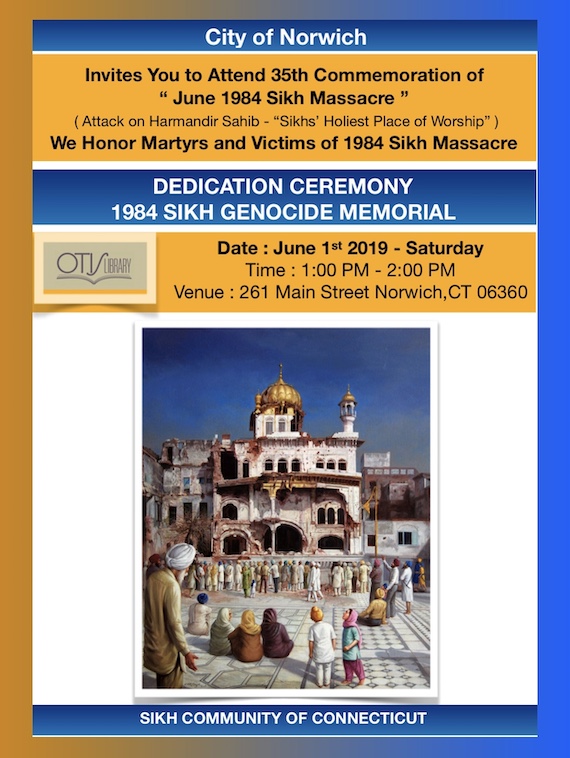 Swaranjit Singh Khalsa President of Sikh Sewak Society International USA said “Our Motive is to bring in light the right narrative which has been suppressed for many many years and also to educate fellow Americans on what happened to Sikh in 1984 and why sikhs decided to choose America as their home”.

“I think It is great step to make 1984 Sikh Genocide Memorial as it will make Sikh community feel safer living here and it also makes a statement that Elected officials of Connecticut understand pain of Sikh Nation and stand in solidarity with Sikh Community ”, said he.

“We invite everyone to come and join us in this event and utilize this educational opportunity”, he added.