Montreal (March 28, 2019): The World Sikh Organisation of Canada is deeply disappointed by the tabling of Bill 21- An Act respecting the laicity of the State today by the Coalition Avenir Quebec government banning the wearing of religious symbols. Public servants in positions of authority such as police officers, judges, prosecutors and also school teachers will be included in the ban. The bill has invoked the notwithstanding clause, allowing it to override freedom of religion protections enshrined in the Charter of Rights & Freedoms and Quebec’s own Charter of Human Rights and Freedoms.

This is the fourth-time Quebec has seen the introduction of a bill banning religious garb or symbols, with this being the broadest proposal to date. 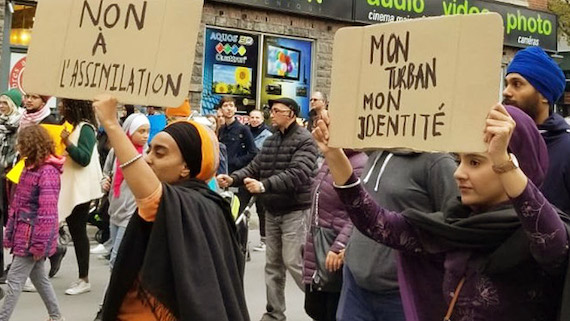 The term “religious symbols” remains undefined in the law- leaving it unclear how particular items of jewellery or clothing will be classified cultural, religious or otherwise and who will make that determination.

WSO President Mukhbir Singh said today “we are deeply disappointed that the CAQ has introduced legislation banning the wearing of religious clothing and symbols in Quebec. The proposed legislation is a solution to a problem that does not exist- there is no evidence to suggest that individuals wearing items of religious clothing are negatively impacting anyone in society. Secularism is about the neutrality of the state towards religion and not about limiting individuals’ freedom of religion”.

“This ban will have a deeply negative impact on Sikhs in Quebec. The wearing of the turban and the Sikh articles of faith is not optional for Sikhs and a ban on these articles of faith is, in effect, a ban on Sikhs in positions of authority. We fear that this ban will have a trickle-down effect into the private sector and young Sikhs who are born and raised in Quebec will find it even more difficult to find jobs in the province”.

“Because the CAQ government has invoked the notwithstanding clause to override protections for freedom of religion enshrined in both the Canadian and Quebec Charters, the only solution is for the people of Quebec to strongly oppose this bill. We are also hopeful that politicians across Quebec and Canada will join us in denouncing this deeply discriminatory legislation.”