Despite massive public exposure of the appalling conditions faced by most migrant construction workers, the Qatari authorities have done almost nothing effective to end chronic labour exploitation.

“The reforms proposed by the government fail to tackle the central issues that leave so many workers at the mercy of employers, yet even these changes have been delayed.

“Unless action is taken – and soon – then every football fan who visits Qatar in 2022 should ask themselves how they can be sure they are not benefiting from the blood, sweat and tears of migrant workers. 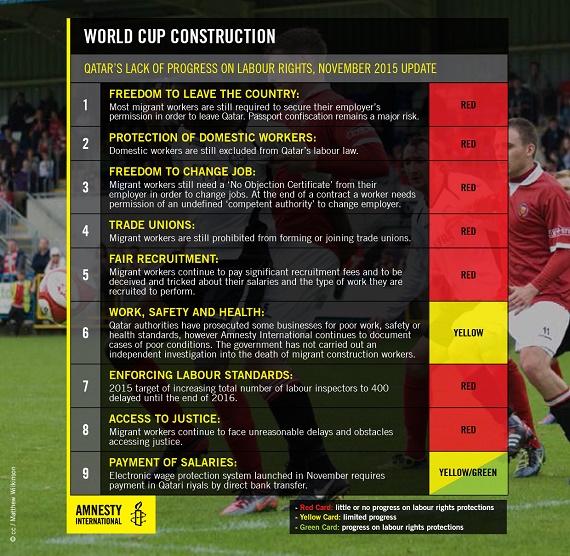 “FIFA has played its part in this sorry performance. It knew there were labour rights issues in Qatar. It must work closely with the Qatari authorities and business partners to ensure the World Cup is not built on exploitation.”

Five years on, Qatar yet to deliver major labour reforms

Amnesty International has carried out five research missions to Qatar in the past four years to investigate the condition of the migrant worker population, expected to reach two million within the next two years. A May 2015 report identified nine fundamental migrant labour rights issues. Qatar has seriously failed to address five of them, including:
· Paying wages on time: A wage protection system that requires businesses to pay workers on time by direct bank deposits was signed into law in February 2015 but only came into force in November. Late payment of wages is a widespread problem that leaves migrant workers and their families back home in desperate situations.
· Commitment to expanding the labour inspector force to 400 by the end of 2015: postponed until the end of 2016.
· Reform of the restrictive kafala sponsorship system central to the problems faced by migrant workers: limited changes promised in May 2014, only introduced in October 2015, and won’t enter into force until the end of 2016. The new system will still require workers to seek their employer’s consent to change jobs or leave the country.
Construction worker Ramesh, whose name has been changed, told Amnesty International how the system makes it harder for workers to stand up for their rights:

“I went to my manager’s office and told him I want to go home because my pay is always late. The manager screamed at me, saying ‘keep working or you will never leave!’”

“Under the kafala system it is all too easy for an unscrupulous employer to get away with the late payment of salaries, housing workers in squalid and cramped housing, or threatening workers who complain about their conditions. That is why kafala requires a major overhaul, not just tinkering at the edges,” said Mustafa Qadri.

“Migrant workers continue to face impediments and delays in accessing the justice system, and are not allowed to form or join unions. Many thousands still struggle to obtain adequate health and other basic services, face delays in obtaining their resident permits, or live and work in intolerable conditions.”

FIFA has done little concrete to press the hosts of its showpiece sporting event in the past five years, said Amnesty International. Most recently, FIFA failed to deliver on its promise this May to investigate the detention of British and German journalists who tried to investigate migrant workers’ working and living conditions.

Amnesty International is calling on FIFA to press the Qatari authorities to implement and monitor reforms to protect migrant workers’ rights.

The organization is also calling on FIFA and its business partners to put in place human rights due diligence systems that identify and prevent human rights abuses linked to the staging of the World Cup.

“FIFA has bent over backwards to make a Qatar World Cup work, even taking the unprecedented step of moving the tournament from summer to winter. But apart from occasional public statements the organization has not set any clear, concrete agenda for how it will push Qatar to ensure migrant workers’ rights are respected,” said Mustafa Qadri.

“FIFA may be moving to new leadership in 2016, but it will not be able to get past its current challenges until it makes it clear that Qatar’s hosting of the World Cup is contingent on respect for human rights.”