This year Sikhs are commemorating 32nd anniversary of the massacre of Sikhs in the hands of Indian state. The Indian state gave it the code name of Blue Star operation. Up to now a lot has been written in India and abroad about that crucial episode of Sikh history. A lot of blood has been shed after that incident. The analysis of embedded intellectuals and journalists is focused around the superficial reasons about that phenomenon. It is being portrayed as the personal conflict of Sant Jarnail Singh Bhindranwale and Indira Gandhi. We think it is very shallow analysis of those historical phenomena. As Kirpal Singh Dhillon, (who was appointed the police chief of Punjab immediately after the attack) said, Indian state and its actors such as politicians, intelligence agencies and journalists, historians do not accept even up to now that there was and is a Sikh problem in Punjab. According to him (Kirpal Singh Dhillon) they are doing so deliberately to undermine the genuine Sikh case. Although this historical incident has become the serious part of Sikh psyche and memory yet it has not become the part of intellectual Sikh historiography. There are very serious and intellectual questions which need to be addressed while we are commemorating the 32nd anniversary of 1984 phenomena. The questions are, as Anthony D Smith put them, why is that so many people remain so deeply attached to their ethnic communities and nations? Why do the myths, memories and symbols of the nation command such widespread loyalty and devotion? And why are so many people still prepared to make considerable sacrifices even of life and limb, for their nations and cultures? 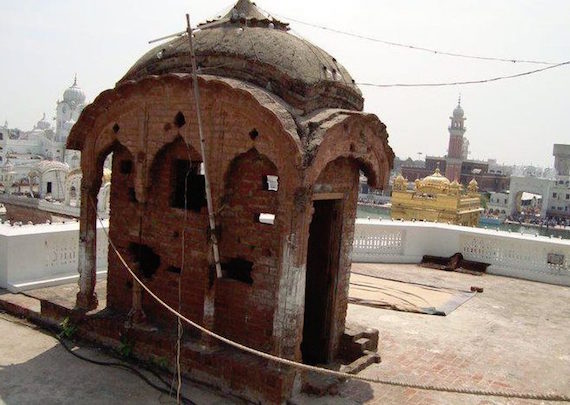 Operation Blue Star should be analysed on these historical lines to feel and understand the deep rooted attachment of Sikhs with their religious heroes, with the myths and memories of their shared values and the attachment with their homeland. A lot of intellectual work has been done globally in this respect. Anthony D Smith, Walker Connor, Elie Kedourie, John Armstrong , Hugh-seton Waston are some of the prominent historians who tried to torn apart the State’s version of historical events. According to Anthony Smith Myths of Ethinic Descent, Myths and memories of nation, Chosen people and Sacred territories play important part in Nation building. Kedourie elaborated this situation by saying that, History and culture provide the motives for conflict as well as solidarity.

According to Smith to trace the roots of these kind of national and cultural conflicts we must trace the origins and formations of nations, as well as their possible future course; as nations embody shared memories, traditions and hopes of the population designated as parts of the nation. A central theme of historical ethno-symbolism is the relationship of shared memories to collective cultural identities. Ethno-symbolism claims that most nations, including the earliest, were based on ethnic ties and sentiments and on popular ethnic traditions, which have provided the cultural resources for later nation formation.

In this process names, symbols, languages, customs, territories, rituals and vernacular texts play an important role in the nation building of an ethnic minority. The common name Singh and Kaur given to us by Guru Gobind Singh ji is very important part of Sikh nation building, our different and sacred symbols as Panj kakaars, Nishan Sahib, langar, nagara, dastar and Sikh Bole, Sat Sri Akal and Waheguru ji ki fateh are the vital part of Sikh identity. Different language, and rituals make us distinct nation. Sri Guru Granth Sahib is there as vernacular text of Sikh nation. Smith tried to explore the historical aspects of this conflict and social consciousness. He stressed the Myth of Ethnic Descent which provides an eagerness to know, who we are and from where and whence we came. No national movement and no persisting ethnic identity can emerge without the bedrock of shared meanings and ideals. These strengthen the potentialities of group identities and collective action. No aspirant ethnic group can be without its myth of descent, if it is to secure any recognition from competitors. Since the late eighteenth century, spokesmen for every ethnic community have made frequent appeals to their ancestry and histories, in the struggle for recognition, rights and independence.

In this historical analysis of Anthony Smith we can assess the role of Sant Jarnail Singh. He regularly tried to explore and interpret the uniqueness of Sikh descent and the responsibility of Sikhs in modern era for their recognition, rights and independence. In view of Smith’s analysis we can explore the role of Sant Jarnail Singh in modern aspect. Smith further says, as a community of culture and a distinctive unity, the nation not only has a past; the roots of its unique identity must reside in its origins and genealogy. In order to claim the new status of ‘nation’, a community’s spokesmen had therefore to advance a case which rested, at least in part, on the conviction of ethnic ancestry and common history. A revolutionary element was injected into the new era of ethnic myth-making. Sant Jarnail Singh tried to inject the revolutionary element by taking pride in Sikh history and the sacredness of the collective identity of Sikhs. Myths of the heroic age and heroes provide models of virtuous conduct, their deeds of valour inspire faith and courage in their oppressed and decadent descendants. The age in which they flourished is the great age of liberation from foreign yoke. After the location of ethnic origin and historical golden ages ethnic communities seek pride in their possession or loss of homeland.

As Anthony Smith puts it, Ethnies also possess common codes and shared symbols and myths of common descent from a putative ancestor. These codes, symbols and myths and the associated historical memories of common past experiences, albeit selectively remembered, are the main features of collective cultural identities in most societies; and they serve to differentiate ethnic from other types of human group and social bond.

With this definition of uniqueness of ethnic identities we can understand the root cause of conflict of Sikhs and Indian state. Indian state is dominated by majority Hindu community. The symbols and codes of state coincide with the Hindu practices. The dominant majority is trying to impose its culture and practice on Sikhs. The Sikh struggle should be viewed not from the myopic vision of Indian state’s law and order problem but from the reactions of an identity under threat. One of the most important analyses of the ideological conflicts is defined by AD Smith with the terms of Ethnic Election and Sacred Territories. He said that one of the most important and common belief in ethnic communities is the myth of ethnic election. This singles out the community as a ‘chosen people’ entrusted with a sacred mission to proselytize or crusade or act as a standard- bearer of the true faith. The mission sanctifies the community and the world and its fulfilment brings closer the salvation of the community and the world of which it forms epicentre. Election myths attach redemption through sanctification to a community of shared memories and myths of origin,turning it into a chosen people entrusted with a sacred task in the world’s moral economy and thereby helping to purify and set that community apart from outsiders.

Khalsa is entrusted with the sacred task of purifying itself apart from outsiders. That is why with the memory and myth are added collective beliefs and rituals; yet these selfsame beliefs and rituals may prevent the population in question from conceiving itself in any other way than as a ‘faith community’. The elect may be persecuted now and subjects today; but in the time their sufferings will be recognized and their virtue rewarded. They will, in the end triumph over their enemies and attain the goal of their journey in history.

The other set of deep resources relates to historic territories and more specifically an ancestral homeland. In general, a specific geographical area or space becomes associated with a particular collectively, in the eyes of its members and of those around, in so far as it provides the location and arena for, and is felt to contribute uniquely to, key moments or turning points in the past experiences of the collectively. The mountains, rivers, lakes and forests of a particular area have afforded a special place and provided the scene of historic events- battles, treaties, revelations, oaths, shrines, migrations and so on. The relation between people and land is the product of continual myth making and the recitation of shared memories. Through the elaboration of folktales and legends and the performance of rituals and ceremonies, successive generations are reminded of various periods of their ethnic histories, and above all of their golden ages.

So according to Smith the function of the ideal of a golden age is the sense of regeneration which it stimulates. Just as ‘our ancestors’ created a great culture or civilization, so surely can ‘we’ run the leitmotif. The nationalist mythology into which the memory of golden age is inserted is one of humble, if special, origins, miraculous liberation, glorious efflorescence, divisive conflict, inner decay, even exile- and then national rebirth. The heroic acts of our forefathers fill us with a sense of dignity and stimulates the need of freedom.

As G Mosse and A Hertzberg concludes, the ancestral land also links memory to destiny. For it is in the reborn land, the homeland which is renewed, that national regeneration takes place. The sacred land of our ancestors is also promised land of our descendants and posterity. It is only on our ‘native soil’ that we can realize ourselves, that the nation can become truly free again. Hence the liberation of the land from oppressors is not simply a political or economic necessity; it is demanded by a unique history that requires fulfilment in a glorious destiny through the rebirth of a community on its own terrain. So these are some ideological aspects of Sikh conflict with the Indian state. It was not the lonely act of 1984 that this conflict erupts, it has many historical and ideological leanings which needs to be debated and interpreted.

While commemorating the 32nd anniversary of that historical divide we have to analyse 1984 from ideological aspects not from mere political ones.