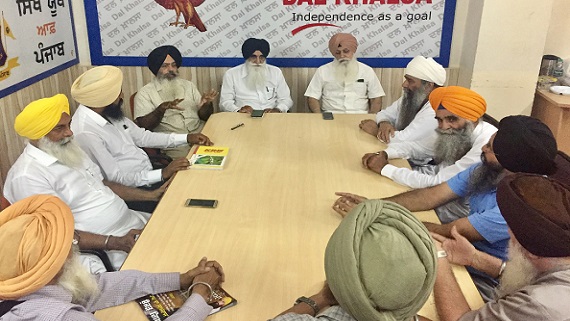 The decision was taken in a meeting of executive committee presided by party president Harpal Singh Cheema. Informing the media, party’s general secretary Paramjit Singh said the march would highlight the role of the Indian State in planning the pogrom executed through masquerading mobs of lumpen elements with full support of the police and the Congress leadership and  failure of the world powers in bringing the perpetrators to book as per the UN charter.

One thing is clear, the carnage started after Rajiv Gandhi was sworn in as Prime Minister of India on 31 Oct along with his four colleagues including P V Narasima Rao. Both as a country’s top executive along with Congress leadership had a tactical role in the carnage”, said party’s youth leader.

He said the march will begin from Gurdwara Haji Rattan and culminate at Gurdwara inside Qila Mubarak where tributes will be paid to victims of mindless violence.

Party’s secretary for political affairs Kanwar Pal Singh said India and its media refuses to acknowledge the killings of officially 2733 and unofficially 8000 as carnage or a genocidal pogrom and have reduced it in writing and oral parlance as a “riot” between the Sikhs and others. If a mass killing of more than 3000 people of one particular community is not genocidal, then what it is ?

Referring to the passing of a motion in the Canada’s Ontario state assembly calling the mass killings of Sikhs in 1984 as ‘genocide’, he said the world community has gradually started acknowledging the role of the state in engineering the carnage.

Beginning with November 1984 in Punjab, the notion that is India has died repeatedly during the last four decades. It died in Mumbai in 1992-1993, Gujarat in 2002 and again in Orissa in 2008. Kanwarpal Singh Singh said the minorities were living in dangerous times and they fear more threats as the politics of genocide and revenge has become an instrument of (India’s) state policy. He reiterated that 1984 events have taught the Sikhs to follow the path of freedom and seek right to self-determination.