All 39 Hostages Taken By ISIS In Iraq Are Dead, Says Sushma Swaraj

New Delhi: During the ongoing post budget session, the Indian Foreign Minister Sushma Swaraj on Tuesday informed the Parliament that all 39 people kidnapped by the so-called Islamic State of Iraq & Syria (ISIS) were killed in Iraq’s Mosul. 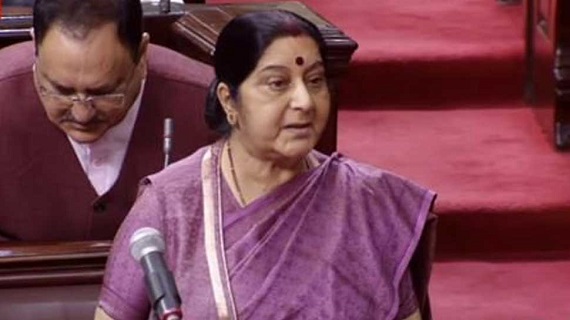 While addressing the session at the Rajya Sabha she reportedly said that a deep penetration radar has confirmed the death of the hostages who had been taken from Mosul. Their mortal remains were exhumed and sent to Iraq’s capital Baghdad for DNA sample verification .

Majority of 39 people killed in Iraq by the ISIS were from Punjab and were working their with a construction company on infrastructure projects. The were taken hostage while evacuating the city.

“Yesterday, we got information that DNA samples of 38 people have matched and DNA of the 39th person has matched 70 percent,” she added to her statement.

Last year the Indian government had asked for DNA samples of the relatives of the missing 39 people in order to establish the fact that the missing Indian citizens were dead.

“It is a sin to declare a person dead without concrete evidence. I will not do this sin,” reads the statement given by Sushma Swaraj last year in Lok Sabha.

Now, with the deaths confirmed, she said the mortal remains will be brought back to India by Union minister of state for external affairs, VK Singh.

“General VK Singh will go to Iraq to bring back mortal remains of Indians killed in Iraq. The plane carrying mortal remains will first go to Amritsar, then to Patna and then to Kolkata,” reads the statemnet of Sushma Swaraj published in an English daily.

Furthermore, she claimed that he story of Harjit Masih, who managed to escape from ISIS, was a lie. Harjit had claimed the Indians were shot dead soon after they were abducted, but that was not how it happened, said the minister, notes Times of India (ToI) in its report.

What happened was that Harjit escaped with some Bangladeshi prisoners who were kidnapped along with the Indians. He had earlier falsely claimed that he was shot in the leg and pretended to be dead.