Chandigarh: The Aam Aadmi Party (AAP) on Thursday (Oct. 4) announced to prepone its hunger strike programme to October 6. Earlier the party was to hold hunger strike in front of Punjab CM residence on October 7. The party said that the decision is taken to allow the party MPs and MLAs to go to Bargari village of Faridkot to express solidarity with protesters led by parallel jathedars. 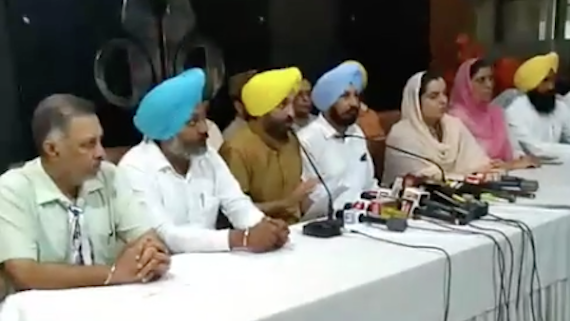 The AAP’s newly constituted 22-member core committee took the decision at a meeting held in Chandigarh after the party was accused of holding the Chandigarh programme on October 7 to “torpedo the protest march” planned Sikh organisations from Kotkapura to Bargari the same day.

“The day-long hunger strike in front of the chief minister’s residence was announced to press the party’s demand for action against former CM Parkash Singh Badal and his son, SAD chief Sukhbir Badal, in connection with sacrilege incidents and the subsequent police action in 2015. Some elements started spreading false rumours that it was planned to counter the march,” said Sunam MLA Aman Arora.

The MLA said the hunger strike will now be held a day earlier so that the party’s elected representatives can go to Bargari on Sunday to express support to protesters.