AAP Punjab Lashes out at Central Leadership; Resolves for Autonomy of state unit

Jalandhar: After facing a defeat in the Punjab Assembly elections, Punjab leadership of the Aam Aadmi Party (AAP) held a meeting on Monday (March 21) at Jalandhar and claimed that “total control over AAP’s Punjab unit by leaders from the Centre” was the main reason behind the party’s poor performance in the state. The meeting was held at the residence AAP leader H S Walia.

Criticising party’s central leadership, AAP’s Punjab leaders demanded that the party’s state unit should be run by Punjabi leaders, with minimal control by leaders from Delhi.

Resolutions including seeking autonomy for the party’s state unit were passed at the meet, which was attended by several AAP leaders who contested the polls, notes the Indian Express (IE). 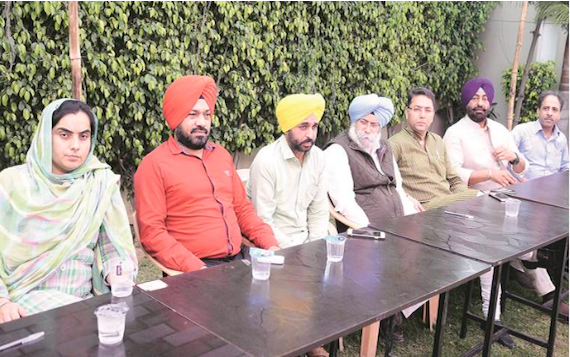 AAP’s Punjab leadership maintained that Delhi leaders had failed in Punjab and demanded that more powers should be given to leaders from Punjab. Not announcing a chief ministerial candidate in the state was also discussed and cited as another major reason for the party’s poll debacle, sources said.

As per media reports, the party leaders strongly criticised central leaders- Sanjay Singh and Durgesh Pathak, who they claimed were controlling all Punjab affairs of the party and keeping Punjabi leaders away from important decisions.

“Several leaders unanimously said AAP’s central leadership should pose their trust in the local leadership instead of controlling everything from Delhi,” said a leader who contested the polls, adding that “arrogance cost the party dear in the state.”

The resolutions were also passed towards the end of the meeting. Leader of Opposition H S Phoolka and MP Bhagwant Mann had already left the venue owing to personal commitments, notes IE.

It is learnt that Kharar MLA Kanwar Sandhu said in the meeting that Punjab leaders were also responsible because they did not raise the matter earlier. Kanwar Sandhu also said a working committee to run the state unit should have been formed.

Bholath MLA Sukhpal Singh Khaira said people though that all control rested in the hands of leaders from Delhi and this worked against state party leaders, said sources.

State party convener Gurpreet Singh Waraich, speaking to the media after the meeting in the presence of Sukhpal Khaira, Kanwar Sandhu and other MLAs, said, “Consensus has emerged that the Punjab unit should take charge rather than the Delhi team.”

Asked whether this would be conveyed to the AAP’s central leadership, the state convener said, “We respect people’s sentiments and will put forth in our political affairs committee (PAC) meeting: That people want Punjabi leaders to run the state unit.”

When pointed out that many party leaders are blaming Sanjay Singh and Durgesh Pathak for the poll debacle, Ghuggi said, “In our party, we do not blame any individual.. It is collective responsibility.”

He added, “We made a point: That SAD-BJP was not fit for ruling the state due to poor governance. But the benefit was taken by the Congress party’s seasoned politicians.”

Earlier, Bhagwant Mann who had left the meeting after his address and before the resolutions were passed, told mediapersons that whatever had come out in the meeting would be discussed in Delhi first.