Chandigarh: The Aam Aadmi Party (AAP) today alleged that millions of dollars flowed in HSBC accounts in Switzerland at a time when Captain Amarinder Singh was the chief minister of Punjab from 2002 to 2007. AAP maintains that those accounts were that of Capt. Amarinder Singh’s son and wife. Senior AAP leaders also release numbers of those three account numbers.

Addressing a press conference at Chandigarh AAP senior leader Ashish Khetan alleged that in 2005 when Amarinder was chief minister of Punjab his son created a web of at least seven offshore companies all registered under British Virgin Islands to siphon off crores of rupees from India.

Ashish Khetan said two prime properties were purchased by Raninder’s companies at London and Dubai at the same time when Amarinder was the chief minister.

A request to transfer the property unit P29 Marina Mansions Dubai UAE was received from Amarinder whom the Income Tax officials in its investigation termed as a discretionary beneficiary of the Jacaranda Trust (JT), which was the parent entity of all seven off shore companies. 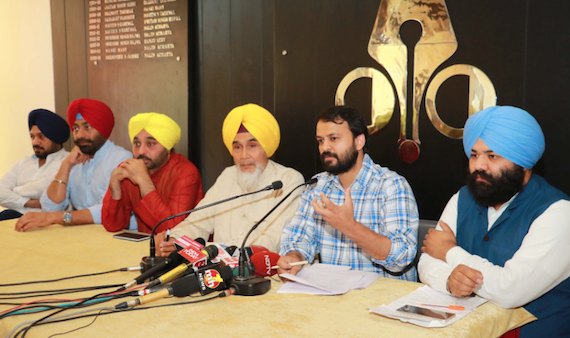 “It is equally baffling to note that so far the IT department has not recorded the statement of Capt Amarinder in the ongoing investigations of the swiss bank accounts of his family members”.

Ashish Khetan said Amarinder should stop playing the victim under the garb of political vendetta. ” In fact the victim of Amarinder and his family’s loot were farmers, unemployed youth, poor sections and the traders who were the worst sufferers”.

Ashish Khetan while presenting the documents of the investigation of the IT department said the documents procured by AAP clearly indicated that his son Raninder Singh and
wife Preneet Kaur opened bank accounts in Switzerland to transfer large sums of money especially when Capt Amarinder was the chief minister in Punjab.

A Ludhiana court on Saturday summoned Amarinder’s son Raninder after Income Tax authorities submitted a challah against him.

According to AAP [t]he challan said Raninder was the settler of the UK based The Jacaranda Trust India (JT) and beneficiary of at least four companies with assets nearly Rs. 460 crore. The court has summoned Ranininder on July 26.

The IT sleuths have also told the court that Capt Amarinder is the discretionary beneficiary of the JT. The IT had filed a case against Raninder for producing false accounts and documents and also lying under the oath in connection with the JT and money in four companies.

Khetan said all aforesaid accounts were opened in the HSBC bank and companies floated when Capt Amarinder was he chief minister in Punjab. “Which means Amarinder was looting the Punjab and transferring the money to Switzerland through the various bank accounts his family members had opened.Otherwise through which ways and means Amarinder was earning his income which was being transferred to the overseas banks”, questioned Khetan.

Quoting the minutes of the meeting of the HSBC which the bank held with Raninder and his father in law Kuldip Dhingra, in London and Delhi, Khetan said the bank officials had a tough time getting the approval of the aforesaid clients.

The bank officials said kuldip Dhingra and Raninder objected strongly to the way in which they had asked detailed questions to both of them as there were cases of corruption registered against them which they had read in press clippings.

Kuldip even told the HSBC bank officials that the ‘real’ swiss banks such as UBS or CS would have never asked such tough questions before opening the accounts.

“This shows both Dhingra and Raninder had quite an experience of opening foreign bank accounts and was perturbed by the HSBC officials on being asked so many questions”, said Khetan.

Sangrur MP, Bhagwant Mann who also accompanied Khetan said, it was surprising to note that though the case of Raninder was flashed in the media day before yesterday but neither Punjab Chief Minister Parkash Singh Badal nor SAD, president and deputy chief minister Sukhbir Singh Badal offered their comments on the issue. ” Earlier Amarinder safe guarded the interests of Punjab Revenue Minister Bikram Singh Majithia by opposing CBI probe against him on the drug issue and now Akalis are not ready to speak against Amarinder on such a big corruption issue. This shows both Akalis and Congress are out to defend each other on the corruption issue”, added Mann.

AAP’s Punjab spokesperson, Sukhpal Singh Khaira said there were three cases of corruption registered against Amarinder such as Intranet scam, Ludhiana City centre scam and Amritsar Improvement trust land grab scam. However the Akalis have not moved an inch to prosecute Amarinder in those cases in the last eight years. This shows both Akalis and Congress are hand in glove”, said Khaira while terming Amarinder as corrupt number one of Punjab.

Others who were present on the occasion include AAP, punjab convener, Sucha Singh Chootepur and head of AAP’s legal cell of Punjab, Himmat Singh Shergill.