AAP Will Demonstrate Throughout Punjab If Rana Gurjit Is Not Removed: Aman Arora 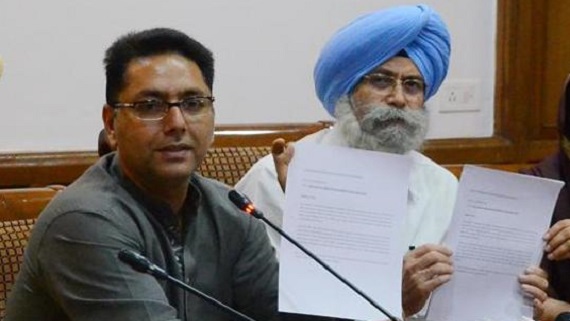 Furthermore, he stated  that instead of taking any action against Rana Gurjit, Amarinder Singh’s government is hell bent upon saving him by appointing a single judge commision to inquire the matter whose proximity to minister’s family is well known. He said that the inquiry is farce, pre-determined and a mere eye wash and does not carry any relevance as the source of money or money trail has been kept out of the purview of the Terms of Reference of the Commission, which further makes it totally toothless.

AAP and Lok Insaaf Party alliance will take the matter of corruption by minister to the streets in case no action is taken by the government, he adds.

Moreover, while further adding to his statement he said that AAP will start demonstrations in coming days in at various place in Punjab. He further added that Sukhpal Khaira, Party’s Chief Whip & Sarabjit Kaur Manuke, Deputy Leader in Assembly will lead protest at Jalandhar on 5th June, Prof Sadhu Singh MP will lead protest at Faridkot on 8th, HS Phoolka &  MLA Bains Brothers at Ludhiana on 9th, Party President Bhagwant Mann at Gurdaspur on 12th and Kanwar Sandhu & Amarjit Singh Sandoa, both MLA will lead protest at Ropar on 14th June. All protests will at Deputy Commissioner’s offices at 10 am.

Party  MLA’s , party functionaries, office bearers and volunteers in large numbers will participate in these demonstrations against the loot of natural resources  being carried out by the corrupt politicians, Aman Arora said.