Telangana: In a written statement the Joint Action Committee for Social Justice (UoH) has condemned ABVP’s attack on members of Joint Action Committee in Bus Yatra in Telangana. When students for #JusticeforRohith organized a Public Meeting in Mahatma Gandhi University, Nalgonda, ABVP disrupted the meeting, attacked the students shouting slogans “Anti-nationals, Khabardar” against Rohith Vemula and the protesting students.

ABVP’s politics has always gone hand in hand with violence and vandalism. ABVP attacked the protesting students for #JusticeforRohith in Lucknow University, Ambedkar University, Delhi and many other places. In Haryana Central University, ABVP vandalised the candle march that was taken out for #JusticeforRohith. The University administration filed FIR against these students alleging them with carrying out ‘anti-national’ activities. The administration forced the students to give a written letter against conducting any protests in future. Student members of a Left organization were attacked by ABVP in Sikar (Rajasthan), Dehradun and Lucknow. In Mumbai, more than 10000 people from colleges, bastis and all over the city gathered in a democratic protest for #JusticeforRohith, following which the BJP-led Maharashtra government and the police have filed an FIR against 1500 unnamed individuals charging them with ‘rioting’. In JNU, when students forged unity and stood together against ABVP lumpenism and deliberate attempts by the BJP-backed media houses to divert nation’s attention from the ongoing struggle for #JusticeforRohith, ABVP backed by BJP Sarkar and Delhi Police witch hunted and targeted students across organizations with charges of sedition. Compromising on the autonomy of an academic space, the JNU administration gave a free hand to Delhi Police to barge inside campus, illegally raid in hostels, male police officers entered ladies hostels and harassed women students and the larger student community. They have made a list of the student leaders of all organizations who led the struggle for #JusticeforRohith. JNUSU President Kanhaiya Kumar visited University of Hyderabad and expressed solidarity with our struggle for social justice. 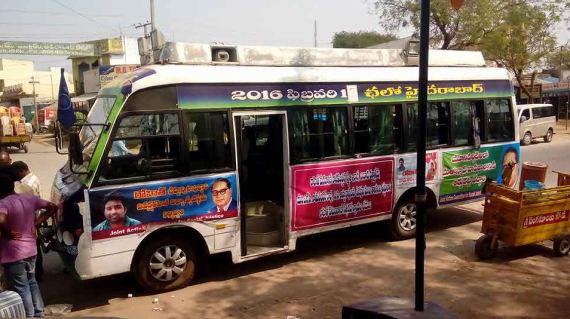 For this reason, he was picked by Police in plain clothes and arrested on charges of sedition. Joint Action Committee for Social Justice (UoH) is outraged by the arrest of JNUSU President Kanhaiya Kumar and demands his release immediately and unconditionally. The very fact that JNUSU President Kanhaiya Kumar was detained by Delhi Police even after making JNUSU’s stand very clear condemning the Anti-India slogans raised by some fringe elements, exposes the nefarious agenda of the entire saffron brigade backed by state machinery to divert the whole attention away from the institutional murder of Rohith Vemula. It is to divert the issue from the rising rage against Rohith Vemula’s murder and to intimidate the progressive voices that are being raised all over the country. While students protesting for #JusticeforRohith in front of RSS office in Jhandewalan were brutally lathi-charged, physically and sexually assaulted and detained by Delhi Police, ABVP backed by the same Delhi Police created ruckus all across the Delhi city. While every other protest demonstration is denied at India Gate, the BJP-backed protests are allowed to take place at India Gate with Delhi Police protection. This exposes the blatant nexus between ABVP, BJP, BJP-backed media houses, Delhi Police and Modi Sarkar. In our struggle for #JusticeforRohith, students and professors united and fought collectively against institutional murder of Rohith Vemula, the interference of BJP in Educational institutes and militarization of University of Hyderabad campus. Similarly, Students and Professors have united in JNU to fight a similar battle against the entire saffron brigade and the State machinery.

At this end, Union Cabinet Minister of State for Labour and Employment Bandaru Dattatreya wrote a letter to Smriti Irani pushing for the order of social boycott and eventually the murder of Rohith Vemula. Similarly, the BJP MP Mahesh Giri wrote to the Home Minister Rajnath Singh and Smiri Irani asking for a stringent action against the targeted and witch hunted protesting students for #JusticeforRohith. Joint Action Committee for Social Justice (UoH) stands with the students and faculty members of JNU in this battle. The powers that be are scared of us, of the voices of the dissent against Brahmanism and Hindu Fascism and the united slogan raised by us for #JusticeforRohith. This reaction of the State is a deliberate and pre-planned conspiracy to target the democratic ethos of Universities that challenge the dominant power structures. The way Rohith’s mother and family were harassed about his caste and the consistent lies by the government to prove that he is not a dalit are similar to their tactics of branding students all across the country as anti-nationalists to delegitimize and shift focus from the questions that we have been raising, for which they do not have any answers. These campuses have historically been places where democratic and dissenting voices have thrived. The Hindutvawadi, Brahmanical and Fascist forces want to malign and supress these democratic histories, movements and voices by sensationalising some issues and labelling all the progressive struggles as anti-national. It is to strangle any thinking and rational voices, like those of Kalburgi, Pansare, Dabolkar and Rohith. It is an attack on the constitution of this country and its people. Joint Action Committee for Social Justice (UoH) strongly condemns the attack on students all over the country, the planned attack on JNU students by the State, the arrest of JNUSU president Kanhaiya Kumar, police brutality and militarization of campuses, the attack on University autonomy and constant State intervention in Universities.