New Delhi, India: The Delhi police have registered a case under sections 365/ 326A/ 307/ 295A/ 435/ 34 of Indian Penal Code (IPC) against one Somnath Nayar and two other unidentified persons in relation to yesterday’s attack on Ranjit Singh s/o Baldev Singh of Bhogal area.

Ranjit Singh (60 was yesterday admitted to trauma section of Safdarjang Hospital in Delhi after an acid by three persons. The attackers also cut his hairs.

In his statement to police Ranjit Singh Bhogal said that he was attacked by Somnath Nayar and two others at Lodhi Road traffic lights at around 6 pm. He said that the attackers started beating him, removed his turban and cut his hairs. “They throw some liquid on me. I smelled some sort of gas and felt burns on my chest and other body parts” he added.

The police says that the case is under investigation.

No arrests have reportedly been made in this case so far. 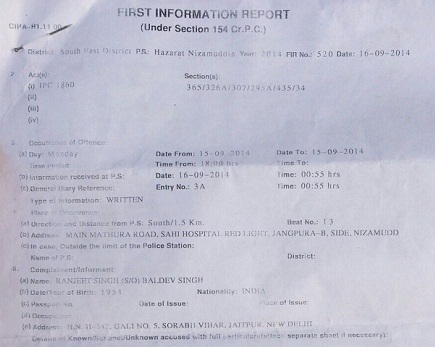 A portion of first page of FIR