Activists, Writers, Educationist, Lawyers from Various States Call for Joint Fight Against the Imposition of Hindi

Madurai: Activists, educationists and the legal fraternity from across the Indian sub-continent participated in a seminar on the topic ‘Language Rights in Federal State’, held in Madurai on Saturday (June 29) and called for non-Hindi speaking population to join hands and fight together against the ‘Hindi imposition’ in the subcontinent and for their language rights. The speakers at the seminar said that the Indian state was trying to impose “one country, one culture and one language” in Indian subcontinent and that the idea was highly condemnable. 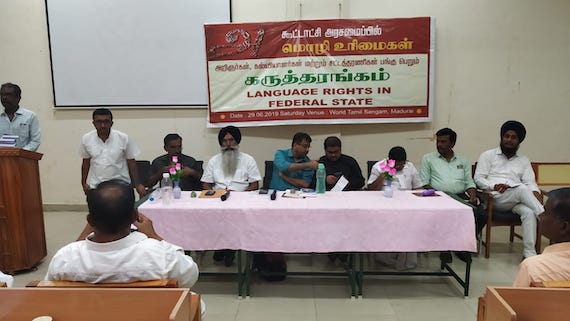 A view of conference held at Madurai (Tamil Nadu)

The seminar was organized jointly by Struggle Committee for Tamil in High Court, Tamil Desiya Advocate Centre and Tamil Writers Forum at World Tamil Sangam in Madurai. Speaking at the event, Garga Chatterjee of Bangla Pokkho said that it was time that all non-Hindi speaking states joined hands together to fight against Hindi imposition”. “We are not fighting against Hindi speakers but for our rights,” he said.

Dr. Dipak Pawar of Mumbai University shared critical review the New Education Policy proposed by the Union government and said that the policy was a handiwork of baabus and has many basic faults.
Further, speaking about the ways to protect Tamil rights, Rama Ki, a chemical engineer, opined that Tamil language needed technological advancements to achieve the same. “But post 1972, there haven’t been enough technological advancements when it comes to Ta mil language and this is an issue,” he said.

Former Madras High Court Judge D. Hariparanthaman said that the present Chapter 17 of the Indian Constitution should be revoked and constitutional amendment should be made to recognize all languages of the subcontinent as official languages.

S. Mahinder Singh Sekhon of Punjabi Bhasha Pasaar Bhaichara shared his experience about practical problems in securing primacy for Punjabi language in Punjab. He said that their group is engaged in activism and legal battle to secure implementation of legal provisions safeguarding the Punjabi language.

S. Parmjeet Singh, editor of Sikh Siyasat News, stressed on the need of better coordination amongst activists of various regions who are opposing Hindi imperialism and trying to secure primary space for their own languages.

The organising team also read out various resolutions, mainly opposing the imposition of Hindi and favouring primacy for other languages.