Gurmeet Ram Rahim, chief of Dera Sauda Sirsa, is undergoing imprisonment after his conviction on rape charges by a special CBI court.

In a video message, Giani Harpreet Singh said that Gurmeet Ram Rahim’s release would be detrimental to communal harmony in Punjab and Haryana.

He said that on the one hand the governments are denying paroles to Sikh bandis (Sikh political prisoners) and even cancelling their duly ordered parole taking excuse of coronavirus lockdown, but on other hand the Haryana state government is going to release Gurmeet Ram Rahim on parole citing coronavirus breakout. 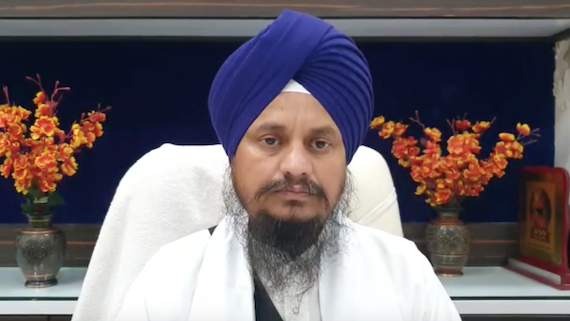 Cautioning the Indian state against release of Gurmeet Ram Rahim, Giani Harpreet Singh said that if the Haryana government releases Sauda-Sadh (Gurmeet Ram Rahim) and he comes out of jail, then it will be an attempt to ignite the peaceful environment prevailing in Haryana for past three-four years.

“It will also be an attempt to provoke Sikhs”, said he, while adding that the Haryana government should avoid taking such a step for the sake of peace and communal harmony in the state.