Bengaluru:  Termed as a backlash against imposition of Hindi hegemony over non hindi speakers of the Indian sub-continent the hindi sign boards at Bengaluru metro  here on Sunday were masked by tape at two major stations, in the middle of an intense social media-fueled row over the use of the language in non-Hindi speaking states like Karnataka. 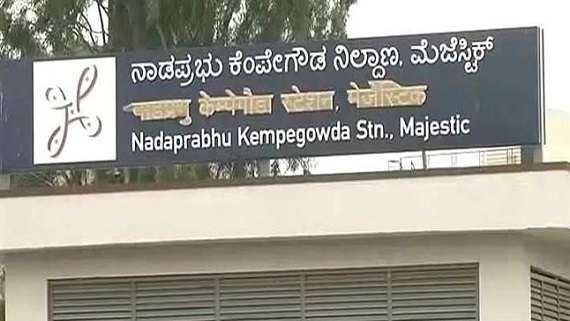 A campaign against the use of Hindi on Bengaluru’s metro has been launched.

The Hindi signature boards at the Chickpete and Majestic metro stations were mysteriously covered up this morning, but it is not clear by whom.

Media reports indicate that so far if the signs were defaced by pro-Kannada groups or by metro authorities in anticipation of trouble. There have been reports that protesters intend to blacken the signboards, but the police denied instructing the Bengaluru metro corporation to cover up signboards. “Based on our assessment we have provided extra security to a few stations, we haven’t asked the metro corporation to cover any signboard,” said police officer Anucheth.

Consistant protest against the use of three language formula has been witnessed on the social media specially on twitter under the popular campaign #NammaMetroHindiBeda – “Our Metro, We don’t want Hindi”.

The protest is not limited to the sign boards of metro itself, the imposition of Hindi in other government departments has meet same resistance from the Kannada speakers of the state. The campaigners called for Hindi words to be taken off metro signs and for Hindi announcements to be stopped.

The Bengaluru Metro, which is jointly funded by the state and the centre, was obliged to follow a central government order to enforce the three-language rule. Those who opposed the move, said it was an imposition and an attempt to promote Hindi at the cost of the regional languages, media sources said.

As the subject was widely debated, Union minister Ananth Kumar said last week that priority should be given to Kannada, followed by Hindi and English for those who do not speak the language. However, groups like the Karnataka Rakshana Vedike argue that Hindi isn’t used so much in neighbouring Kerala and Maharashtra, reports NDTV.