New Delhi, India: Anti-corruption activist Anna Hazare has reportedly written a letter to Indian Prime Minister Narendra Modi threatening to launch an agitation if the black-money was not brought back to India. Anna Hazare also criticized the BJP government for telling the Supreme Court that all information on black money stashed abroad can’t be disclosed.

“Bringing back black money is an important issue before the nation. If needed, I won’t shirk from organizing an agitation on this matter” Anna Hazare wrote to Narendra Modi in his recent letter. 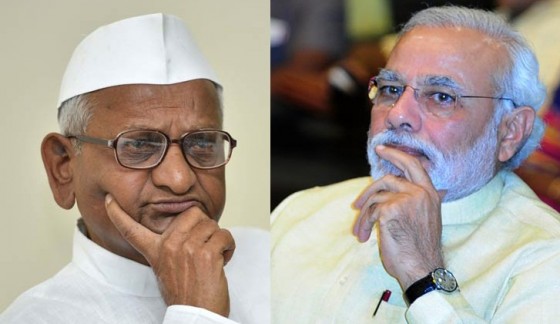 Reminding Indian Prime Minister of his promise made during Lok Sabha elections campaign about bringing back black money once voted to power, Anna Hazare expressed displeasure over the government submitting before the Supreme Court that all information on it received from countries with which India has Double Taxation Avoidance Agreement (DTAA) cannot be disclosed.

“I have undertaken many agitations in the last 35 years. They were not against any party or individual but for the benefit of society and country,” he said, adding “you (Modi) have a vast experience in power. I am a fakir and don’t have any wealth. I will live and die for the country.”

Anna Hazare also said he had written to Narendra Modi on the issue of Lokpal in August but was still to receive a reply.