New York/ Chandigarh: The World Sikh Convention was held in New York on 3rd March 2018. According to the organisers, the event was a huge success. A written statement issued by the organisers of the event many Panthic Sikh organizations from around the world came together to discuss  building the World Sikh Parliament.

“Sixteen (16) countries have  put forward candidates for the World Sikh Parliament. Jathedar Jagtar Singh Hawara will announce co-ordination committee for Punjab and rest of India at Vaisakhi 2018”, the statement reads.

Meeting Held on August 2017 in Birmingham, UK decided that it is essential to setup World Sikh Parliament to provide direction and resolve issues in global Sikh Affairs for future generations.

“Sri Akal Takht Sahib Jathedar Jagtar Singh Hawara has asked all of the Khalsa Panth to come together and make this dream a reality. Answering this call,  a diverse range of Sikh activists, Jathebandis, organizations and Gurdwara representatives from around the World, attended the two day World Sikh Convention in New York”, the statement reads.

The Convention started with Ardas and then a letter from Bhai Jagtar Singh Hawara was read out by his lawyer Advocate Amar Singh Chahal.

The organisers of the World Sikh Convention said: “A significant mandate was given for progressing with its formation. Issues such as including representatives from sections of global sikh community, including Wanjara, Sikhligar Sikhs, Afghani Sikhs, etc as part of an inclusive approach to counter the divisions that are being created by Radical Hindutava policies. The convention has requested all active Sikh youth activists, female Sikh activists and any remaining sikh organizations to come and be a part of this progress to the formation of the World Sikh Parliament. The Convention made a clear commitment to the formation of Sikh homeland Khalistan as an aim”.

The statement, however, did not mention names of these members. 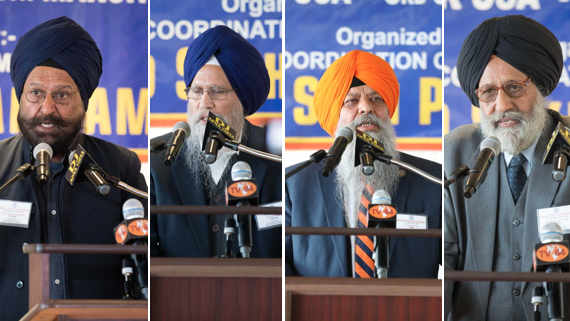 “This now brings total number of World Sikh Parliament representatives to 94 from 16 countries with a further 56 places left from outside India and 150 from India. Nominations for this places are open to all global Sikh organizations that wish to participate in this process. Jathedar Jagtar Singh Hawara is himself announcing the 15 member working committee to select the India and Punjab representatives at Vaisakhi 2018” the statement reads.