Another incident of Potential Hate Crime Against elderly Sikh in USA

Bakersfield, CA: As per a newsletter by the Sikh Coalition [o]n the afternoon of December 7, 2015, a 78-year-old Sikh man was assaulted while he waited to pick up his grandson from Warren Middle School in Bakersfield, California. An unknown assailant threw an apple with great force at Mr. Gian Singh, hitting his turban. The police have not yet identified or apprehended the individual.

Mr. Singh, who picks his grandson up from school every day, was attacked when an individual in a pick-up truck threw the apple with such force that he almost fell over. The force split the apple, stained Mr. Singh’s turban, and left him with head pain and dizziness for days. Mr. Singh’s son reported the crime to the police that day.

“The Singh family has retained the Sikh Coalition for direct legal support. The Sikh Coalition’s legal team is currently advocating for the Bakersfield Police Department to investigate the matter as a hate crime, given that Mr. Singh’s religiously-mandated Sikh turban was targeted”, reads the newsletter.

“In the current climate of fear and backlash, we remain committed to investigating and protecting every Sikh who is subject to a possible hate crime,” said the Sikh Coalition’s Legal Director, Harsimran Kaur. 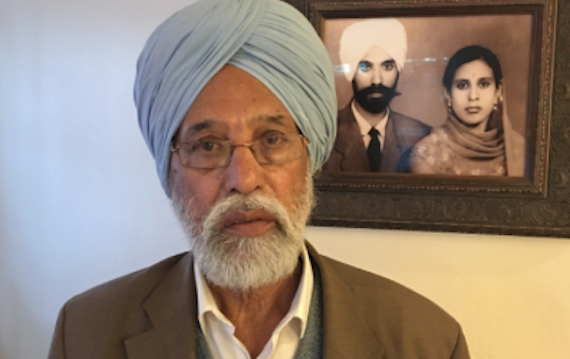 The attack on Mr. Singh occurred only days after vandals spray-painted racial slurs on the Gurdwara Singh Sabha in Buena Park, California and other backlash incidents across the country.

“During this period of increased anxiety, we urge Sikhs to exercise extra vigilance and caution. Please notify law enforcement of any threats or incidences of violence and contact the Sikh Coalition at 212-655-3095 or [email protected]” reads the news letter.

As per newsletter the Sikh Coalition has 14 years of expertise in providing free legal assistance to Sikhs who believe they have experienced discrimination or bias-based violence. Most recently, the Sikh Coalition worked with the Gurdwara Singh Sabha sangat in Buena Park to successfully pressure police to investigate bias-based vandalism at the gurdwara. An arrest has been made, and the offender delivered a public apology to the sangat on December 13, 2015. He also faces criminal charges. In addition, the attacker of Sikh Coalition client Inderjit Mukker pled guilty to a hate crime charge in DuPage County, IL on December 7, 2015.