Kurukshetra: Antim Sanskar of Sikh activist Gurbaksh Singh Khalsa was held at his native village Thaska Ali in Kurukshetra district on Sunday (March 25). The Antim Sansakar was to be in the morning, but it was stalled after the administration failed to show a copy of suspension orders of two SHOs whose action had reportedly forced Gurbaksh Singh Khalsa to jump off a water tank on March 20. 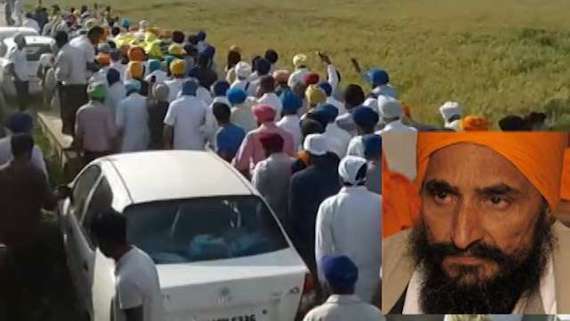 The family members of Gurbaksh Singh Khalsa and representatives of Sikh groups were demanding suspension of Jhansa and Ismailabad SHOs, and filing of a fresh FIR under Section 306 (abetment to suicide) of the IPC against the SHOs.

On Saturday evening, it was agreed to hold the Antim Sanskar on Sunday morning after BJP MLA Bakshish Singh Virk announced that the demands were met. But it was later discovered that the concerned SHOs were not suspended and merely SDM level inquiry was ordered.

It is learnt that the police was under pressure from its’ lower rank officials who were opposing the suspension taking a plea that the SHO were acting on the orders of the SSP.

After fresh rounds of talks the police administration agreed to show a copy of suspension letter commanding suspension of concerned SHOs. Representatives of Sikh groups went to meet senior police officials to check if the suspension order was actually passed.

Bhai Harpal Singh Cheema of Dal Khalsa, who was entrusted with the task to verify the suspension document, told Sikh Siyasat News (SSN) over phone that a senior police official showed him the suspension order over his phone after which he informed the family members of Gurbaksh Singh Khalsa and representatives of Sikh groups accordingly.

It is notable that last week (on March 20) Gurbaksh Singh Khalsa had announced to start third round of struggle seeking release of Sikh political prisoners who have completed minimum mandatory terms of their sentences. He had announced to hold a fast on a water tank. After the police tired to bring him down forcibly he jumped of the water tank. Eyewitnesses say that the police action had forced him to jump off the wall and he was repeatedly asking the police to not to disrupt his peaceful protest.

Amtim Ardas of Gurbaksh Singh Khalsa will be held on March 29 at his native village Thaska Ali. There are reports that at some place the Haryana police also prevented Sikh sangat and representatives of Sikh bodies from reaching at Gurbaksh Singh Khalsa’s village to attend his Antim Sansakar.