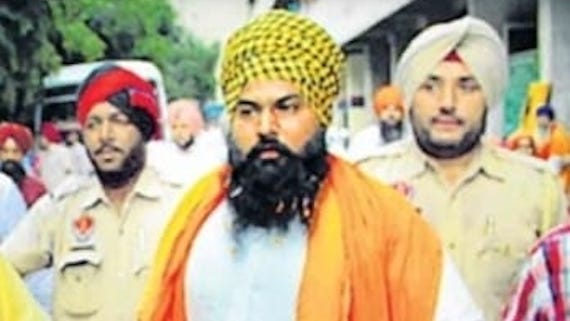 A file photo of Jaspreet Singh in police custody

In a complaint to the High Court, moved on behalf of Jaspreet Singh’s mother Advocate Jaspal Singh Manjhpur said that on 26 June 2019, Rajinder Kaur, mother of Jaspreet Singh, came to know through newspaper that on 25 June her son was implicated by the police in a murder case.

According to the complaint Rajinder Kaur went to the court of Gurbhinder Singh Johal, Duty Magistrate, Patiala on 27 June at 9 am to meet her son but by that time Jaspreet Singh was already produced before the court and was remanded to police custody till 29 June.

After that Rajinder Kaur went to CIA Staff Patiala where her son kept in police custody and police officials permitted her to meet her son and at that time Jaspreet Singh was not able to stand and appeared to be physically tortured. According to Rajinder Kaur her son was mentally drained and was not even able to speak.

Maintaining that the Patiala police tortured Jaspreet Singh physically and mentally, and accusing the magistrate for not following the guidelines issued by the Supreme Court of India (SCI) regarding the court appearance of arrested persons, the complaint seeks appropriate action.