New Delhi: Delhi Chief Minister Arvind Kejriwal was slapped by a man on Saturday during his roadshow in Moti Nagar area for the upcoming Lok Sabha elections, with AAP calling it an “Opposition-sponsored attack”.

The incident happened when Kejriwal was waving to the people who had gathered during his roadshow. A man, wearing a maroon-coloured shirt, climbed on his car and slapped him on his face. 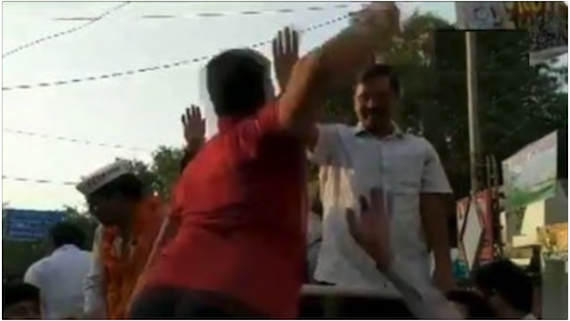 Calling it another “negligence” in the security of the chief minister, AAP said the “Opposition-sponsored attack” won’t be able to stop the party in Delhi.

“Another negligence in the security of CM Arvind Kejriwal. Delhi CM Arvind Kejriwal got attacked during the roadshow. We condemned this cowardly act. This opposition sponsored attack cannot stop the Aam Aadmi in Delhi,” AAP tweeted.

Police said the man had been taken into custody and an investigation into the matter was underway. PTI quoted DCP (West) Monika Bhardwaj as saying that the man had been identified as Suresh (33), who deals in spare parts at Kailash Park.