The Premier was given a tour of the Gurdwara and apprised of its diverse community oriented activities and programmes after which she partook tea and refreshments.

“The Premier accepted an invitation to meet with the Board members of the Australian Sikh Association and two representatives of United Sikhs, a U.N. associated international advocacy NGO that is also registered in Australia”, reads a joint release issued by ASA and United Sikhs. 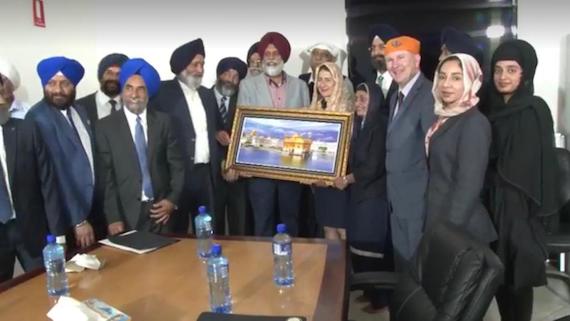 Premier of NSW Visits Sangat of the Gurdwara Sahib Glenwood

At the conclusion of the meeting, the Premier was handed a letter which informed her that she leads a State where the first Sikh Gurdwara was built in 1968, in Woolgoolga, where today Sikhs comprise 50 per cent of the population and own 90 per cent of the local banana farms. Further, of the 19 Australian Sikh ANZAC members, five were enlisted in New South Wales.

The letter further stated that “Whilst Sikhism is Australia’s fastest growing religion since 2011, Sikhs continue to be a visibly invisible religious minority.”

The letter, which was signed by the ASA Company Secretary, Mr Balvinder Singh Chahal and Mejindarpal Kaur, the International Legal Director of United Sikhs, made a request in relation to two pressing issues, which particularly affect Sikhs in New South Wales, namely:

Recent statistics reveal that Sikhism has grown over 500 per cent in Australia in the last ten years.

Even though Sikhs in New South Wales are hard-working active contributors to a broad range of community, industry, civil service and professional areas, regrettably, they are not appointed at senior levels to advisory boards, commissions, committees or other public authorities. As a consequence, Sikhs have had limited input in decision making in the public sector.

Equally, Sikhs feel that it is time that the New South Wales Parliament has its first upstanding Sikh male or female MP, who will also be the first Sikh MP in Australia. This can only be achieved if a political party, for e.g. the Liberal Party, fields a Sikh candidate.

“To this end, we request that appropriate persons from the Sikh community of NSW be identified and allowed an opportunity to participate in senior representative roles within the NSW government and as a first Member of Parliament,” the letter said.

Secondly, the Premier was reminded of the New South Wales Sikh community’s long standing request for an exemption for Sikh pedal cyclists, who are mandated by their faith to wear a turban at all times.

“We understand that apart from the ACT, New South Wales is the only Australian State or Territory to not have an exemption for Sikh persons riding, or being a passenger on a bicycle. This operates to effectively ban Sikh persons from riding or being passenger on a bicycle in NSW. This is inconsistent with the position taken by most other States and Territories in Australia and is also out of step with community expectations,” the letter re-iterated.

The letter further informed the Premier that according to legal advice obtained by United Sikhs about the validity of the relevant NSW road rule, it is likely that it will be found to be invalid pursuant to section 109 of the Australian Constitution to the extent that it restricts a Sikh person from riding, or being a passenger on a bicycle in NSW without penalty.

“It is safe to say that this is an issue that is close to the hearts of all Sikhs, persons of Indian decent and the broader Australian community. Given the strong community support for a helmet exemption for Sikh persons, we implore you to consider supporting an exemption,” the letter said.

It was suggested to the Premier during the meeting and again re-iterated in the letter that words to the effect of those appearing in the South Australian road rules could be adopted in the State of NSW so to allow for an exemption to Sikhs in New South Wales.”

The Premier warmly received the submissions put on both of the main issues and agreed that it would be appropriate to meet further to discuss an exemption for Sikh pedal cyclists.