Chandigarh: Punjab Chief Minister Parkash Singh Badal has reportedly written a letter to Indian Prime Minister Narendra Modi opposing the decision of Maharashtra government to appoint a BJP MLA Tara Singh as chief of management board of the Takhat Sri Huzoor Sahib, Nanded. In his letter CM Badal reportedly said that the decision was against the Sikhs Maryada.  It is notable that Tara Singh is close to Hindutva fountainhead Rashtriya Swayamsewak Sangh (RSS) and his appointment as President of Takht Hazoor Sahib management board has triggered a strong wave of anger amongst Sikh circles. 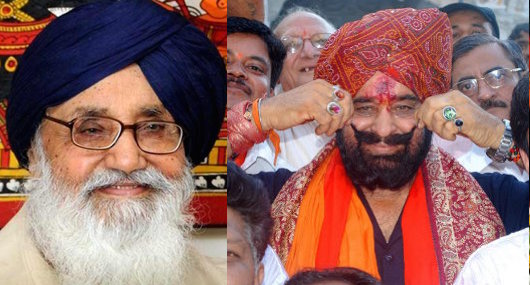 In his letter to Indian Prime Minister Narendra Modi, Parkash Singh Badal said that the impugned move on the part on the Maharashtra government was in complete violation of the ‘Sikh Maryada’ and was to hurt the religious sentiments of Sikhs across the world. He described this decision as “extremely unfortunate, anti-Sikh” and direct interference in the religious affairs of the Sikhs.

Parkash Singh Badal sought personal and direct intervention of Indian Prime Minister Narendra Modi urging him to direct the Maharashtra government to review and completely reverse its decision to appoint a non-baptised person, Tara Singh, (a BJP MLA) as the chief of management board of the Takhat Sri Huzoor Sahib, Nanded, immediately. Badal said there was neither religious sanctity nor administrative logic behind the move.

“As a matter of fact, this was completely avoidable provocation that could have a bearing on the precious ideals of communal harmony in the country,” said Badal. Against this backdrop, Badal said that the decision to appoint a non-baptised Sikh as chief of a board to manage.

the affairs of the holy Takhat associated with the life and teachings of the Tenth Sikh Guru Gobind Singh, was fraught with danger as it seriously offends the basic religious ‘Maryada of the Khalsa panth’, according to which only a baptised Sikh can hold such a sensitive assignment.

It was unthinkable for the Sikh masses to see a non- baptised person heading a holy religious Takhat of their community, added Badal.