Chandigarh: Bargari Insaaf Morcha (BIM) organisers have announced to contest the 2019 Lok Sabha elections in Punjab. BIM leaders, led by Bhai Dhian Singh Mand announced to filed four candidates and said that its doors are open for any group, “except the Congress, SAD (Badal) and the BJP”, for an alliance ahead crucial parliamentary polls.

The state is already engaged in multi-cornered contest. Besides the traditional contesters— the Congress, and the SAD-BJP, the Aam Aadmi Party (AAP) has emerged as the third player in the State politics. Splinter groups of AAP and SAD (B) have forged alliance under the name of Punjab Democratic Alliance (PDA). 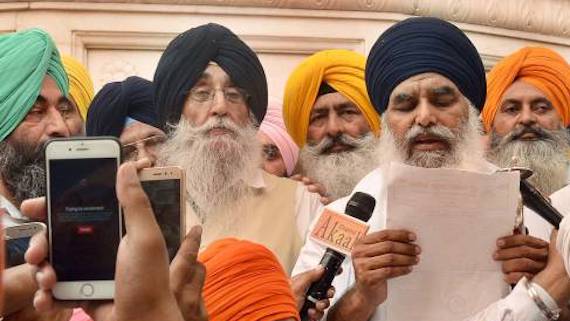 Making announcement for fielding candidates in Lok Sabha election Bhai Dhian Singh Mand maintained , on Wednesday (Feb. 6) that the election contest was actually the “next phase” of his “struggle”.

“The Morcha has constituted a three-member committee that would negotiate with other political groups, except for the BJP, Congress and SAD (Badal), to make an alliance to contest polls”, he added.

Morcha constituents, Shiromani Akali Dal (Amritsar) and United Akali Dal, have decided to contest the upcoming parliamentary elections under the banner of Bargari Insaaf Morcha in alliance with the SAD (Taksali), PEP, BSP, and others under the Punjab Democratic Front.