Chandigarh: Sikh Political Prisoner Bhai Balwant Singh Rajoana’s sister Kamaldeep Kaur Rajoana has moved to the Punjab and Haryana High Court against death sentence awarded to Bhai Rajoana by an Indian court about a decade ago.

The petition filed against the Union of India and other respondents by Kamaldeep Kaur Rajoana through counsel Gursharan Kaur Mann was placed before the Bench of Justice Rakesh Kumar Jain on Tuesday (Oct. 3).

In a Facebook post Kamaldeep Kaur said that the petition numbered as CWP-22558-2017 will be heard on November 2. 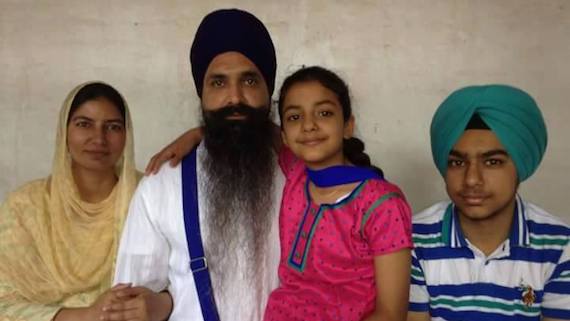 A news report in The Tribune (TT) notes that [a]fter preliminary hearing, Justice Jain adjourned the hearing to November 2 for Mann to address the court on the issue of locus standi — the right or capacity to bring an action or to appear in a court.

In her petition Kamaldeep Kaur said that Bhai Balwant Singh Rajoana had been languishing in prison for 22 years. Almost a decade had passed since the death sentence was pronounced and seven years had lapsed since it was confirmed. She said that Bhai Rajoana had experienced immense pain and suffering due to the delay in carrying out of the sentence after its confirmation by the HC. “This extraordinary and unjustified delay in the carrying out of his death sentence has also caused physical and mental agony to the petitioner and her family,” she said.

Appearing for Kamaldeep Kaur, Advocate Gursharan Kaur Mann argued that Bhai Balwant Singh Rajoana refused to seek “legal representation” during the course of his entire trial. He did not file an appeal against his death sentence, which was confirmed by the HC on October 12, 2010. He did not even prefer a Special Leave Petition against the HC judgment.