Bhai Hawara’s council Advo. Jaspal Singh Manjhpur told Sikh Siyasat News (SSN) that these three cases were register in 1995 at police station Kotwali Ludhaina, which is know now a days as PS Division No. 1. Of these three cases, one case (FIR 103/95) was committed to District and Sessions Court by the court of area magistrate Harpreet Kaur Nafra as this the charges included the charges of 307/427 IPC and 3/4/5 of Explosives Act. Next date of hearing in this case is fixed on Dec. 7. 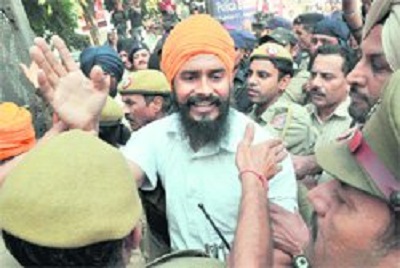 Hearing in another case (FIR no. 134/95, PS Kotwali, Ludhiana) was adjourned to Dec. 3, 2015 by the court of Additional Sessions Judge Dinesh Kumar.

Third case (FIR no. 134/95, PS Kotwali, Ludhiana) relates to recovery of weapons and the court of area magistrate Harpreet Kaur Nafra has fixed Dec. 7 as the next date of hearing.

Advo. Jaspal Singh Manjhpur said that Bhai Jagtar Singh Hawara was in high spirits as usual and he shared his greetings on the eve of Parkash Gurpurab of Guru Nanak Ji with the Sikh world.

He criticised the repressive tactics that are being adopted by the Punjab government against Sikh leaders and activists. As regards his appointment as Jathedar of the Akal Takhat Sahib, he said that he values Sangat’s feelings but being confined in Tihar jail he was almost cut-off from the outside world. He said that he had only incomplete information about events of past few weeks and he would soon share his feelings with the Sikh sangat in written form.