Bathinda: According to a news reported by The Tribune (TT): Bihar Chief Minister Nitish Kumar will hold a meeting with ‘Sarbat Khalsa’ organisers besides various other Sikh bodies in the state in June.

The decision to hold the meeting has been taken after delegations of the Sarbat Khalsa, including members of the United Akali Dal (UAD), met Nitish Kumar recently during the visit of Sarbat Khalsa-appointed “Jathedars” to Takht Patna Sahib, notes the English vernacular. 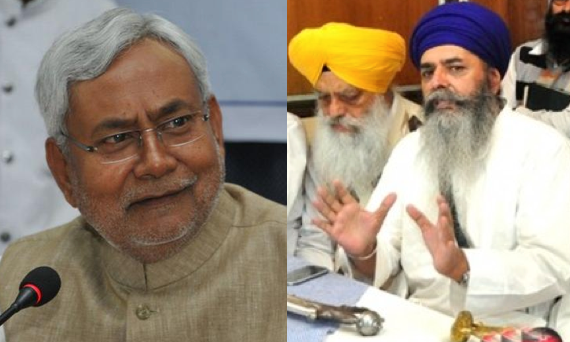 As per TT, [c]onfirming the development, KC Tyagi, secretary general and spokesperson for the JD (U) said, “The CM will visit Punjab in June, but the date has not been fixed yet. Before the CM’s visit, I will go and meet people in Amritsar or Chandigarh. We will hold a meeting with Sarbat Khalsa organisers as two delegations had met us recently over this.”

“There are no plans to meet any party leader. Our main aim will be to meet the organisers of the Sarbat Khalsa”, report quotes KC Tyagi.

The report quotes to undisclosed sources that the Bihar CM would also hold a meeting with AAP leaders too along with the organisers of the ‘Sarbat Khalsa’ to mull on the possibility of alliance for the 2017 Assembly elections in the state.

It further says that hte UAD leaders had held meeting in this regard with BSP leaders too besides holding meetings with Nitish.

“We don’t want to reveal anything at the moment. However, one thing is sure that we are fighting seriously and are ready for the Mahagathbandhan with parties other than SAD, BJP and the Congress in Punjab”, said UAD leader Gurdeep Singh Bathinda.

Notably, few days back UAD chief Mohkam Singh had declared to have abandoned the issue of Khalistan. He had said that he has no objection if he is being called as an Indian Nationalist. He had said that their alliance with Simranjeet Singh Mann, who want to achieve Khalistan by participating in Indian electoral system, could last only within the framework of Indian constitution.