A release issued by PUDR states that a six-member team of PUDR conducted a four-day fact-finding from 16-19 December 2019 into the incidents of police brutalities at the campus of Jamia Milia Islamia University on 13 and 15 December 2019.

“The brutalities happened in the context of protests against the Citizenship (Amendment) Act 2019, passed by the Parliament on 11 December 2019”, the release adds.

“The report is based on our investigations, provides a picture of police terror and the police as a lawless force sanctioned to quell dissent. PUDR spoke to a number of students, teaching and non-teaching staff on campus; with doctors, injured students, their parents; with local residents and their staff, eyewitnesses to different events. The team also visited campus and found broken locks, empty tear-gas shells, broken windows and furniture, blood on the floor, among many other visible signs of the destruction of that night. The report provides an extensive, though not exhaustive account of the course of events from 13 December to frame the context for the ensuing violence on campus on 15 December”, the release reads further. 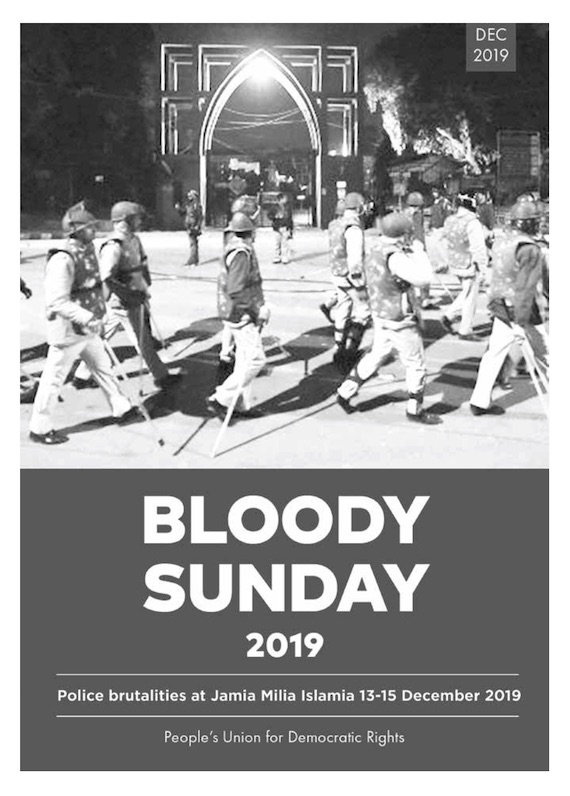 The PUDR stated that its report finds that, prior to the incident of crackdown on 15 December, there had been a similar crackdown against protestors by the Delhi police in riot gear on 13 December, when the police attempted to stop a rally comprising thousands of students and residents of neighbouring areas from marching to Parliament street to express their opposition to the CAA. At the time, the Delhi police used unauthorized and excessive force to restrain the rally from proceeding further, through indiscriminate lathi-charging, teargasing and destruction of public property in and around campus. At that time too, the Delhi police unauthorizedly entered campus, beat up students and destroyed property unrelated to the protest, and unlawfully detained many. The crackdown on 15 December was an escalation of the same strategy by the Delhi police to overpower students through indiscriminate force.

“On Sunday, the police again resorted to excessive lathi-charging and teargasing to restrain a thousand-strong rally of protestors from moving towards Mathura Road. The DGP (South East) claims that this was necessary to control a violent mob of protestors. But the modus operandi and nature of injuries on those admitted at hospitals for injuries during the violence indicate otherwise. Apart from confirmed bullet injuries and the use of approx. 400 tear gas shells, injuries were predominantly on the head, face or legs, showing intent to maim or cause maximum damage“, the statement of rights group reads further.

“Further, the report finds that the use of force by the Delhi police inside campus, ostensibly to address stone-pelting from inside the gates, was entirely unauthorized and unjustified. The report details gruesome accounts of the police forcefully entering campus by breaking locks at gates, assaulting guards, breaking CCTV cameras, proceeding to indiscriminately lathi-charge, tear-gas, beat up, communally abuse and humiliate every single person– men and women alike- in their sight, and then to launch unprovoked attacks on students and workers unrelated to the protests in the libraries, mosques, bathrooms, gardens etc.”.

“This combative and communal treatment against students continued at the police stations and hospitals where the injured had been admitted, as the Delhi police systematically obstructed and denied emergency and necessary medical care to dozens of injured, and unlawfully detained more than 50, and denied them legal aid. At all these times, students were continuously abused with communal slurs and threats. The intent appears to be to inflict maximum damage and terrorise the university, as opposed to one of minimum damage in efforts to control a violent assembly”.

PUDR has noted that since 15 December, the Delhi police has unleashed similar brutalities at both protestors and Muslim neighbourhoods across Delhi. The patterns have been similar: lathi-charge, tear-gas firing, followed by large-scale detentions, and denial of legal and medical aid to detenues. Between 13 and 23 December, about 1500 persons have been detained in Delhi under the cover of violence relating to anti-CAA protests. Protests have been disrupted at Jamia University (13 and 15 December), Arts Faculty DU (17 December), Red Fort and Mandi House (19 December), UP Bhawan (21 and 23 December) and Assam Bhawan (23 December). Targeted attacks at Muslim neighbourhoods were seen at Seelampur-Jaffrabad, Daryaganj and Seemapuri (20 December). The most brutal of these were at Daryaganj where about 11-12 minors were detained at the police station until 3am, with denial of medical and legal aid. Preceding that had been brutal lathi-charges at protestors, with injuries reported mostly on the head. At least 1 minor had also been detained at Seemapuri thana on 20 December until late night hours, again without medical or legal aid for long hours. FIRs have been registered against at least 40 persons who are presently in judicial custody, charges ranging from arson, to rioting, to unlawful assembly, destruction of public property etc., for incidents at Jamia University on 15December, Seelampur, Seemapuri and Daryaganj on 20December. PUDR investigations into these incidents are ongoing.

PUDR had demanded that an FIR must be registered against the Delhi police for brutal use of force in and around Jamia Millia Islamia University, and that a Commission of Inquiry be instituted to examine the unauthorised, unjustified and excessive use of force and wanton acts of destruction by the Delhi Police. PUDR further demands that the right of citizens to protest must be recognized as inalienable and the practice of routine refusal to grant permission must be stopped.