Amritsar Sahib/Chandigarh: As per the media reports banker-turned-writer, Amardeep Singh, launched his second book ‘The Quest Continues: Lost Sikh Heritage – The Sikh legacy in Pakistan’ ,dwelling the sorry state of Sikh historical sites in Pakistan. The book was launched at the Khalsa College for Women (KCW) on Tuesday. 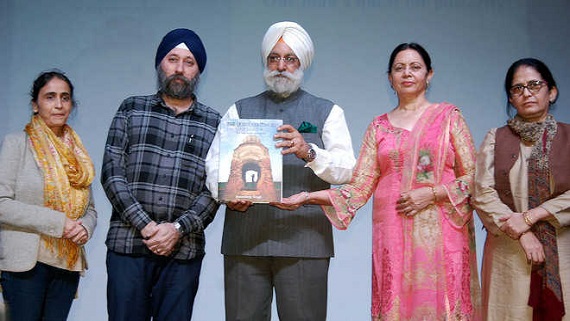 Author Amardeep Singh releases his book, ‘The Quest Continues: Lost Sikh Heritage – The Sikh legacy in Pakistan’, at the Khalsa College for Women in Amritsar on Tuesday. Tribune Photo

His work highlights plight of buildings and historic sites belonging to the Sikh period in the neighbouring country. During the presentation based on his new book, Amardeep Singh said over 80 per cent of the heritage of the Sikhs was left behind in Pakistan after the Partition and not much effort had been taken to document historical sites, Amardeep Singh said.

While interacting with the media about his motivation behind the book he stated that  “I was on a sudden visit to Pakistan in 2014 when I came face to face with this reality and I was amazed the way the heritage was being ignored and vandalised, thus I documented the first book and now the second one,” he adds.

The pictorial book that was made public today contains hundreds of pictures of buildings, religious shrines, historical places, which highlight the plight of these buildings and how they need to be preserved.

“In the present work, I went to remote areas of Pakistan and found buildings and structures in inaccessible terrains. I want to digitise these architectural forms spread in 36 Sectors in Pakistan, some of those are in remotest of areas, reads the statement of Amardeep Singh published in an English vernacular.

Gunbir Singh, Dilbir Foundation head and joint secretary, said Amardeep, who was born in Gorakhpur, was a widely travelled historian and writer who had worked as a banker in Chicago, Hong Kong, Singapore and Pakistan. He collected valuable data to compile the significant work, notes The Tribune (TT).